Trump: Not an Ideologue or Crusader 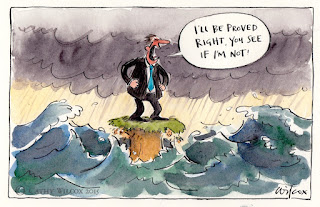 Donald Trump has yet to formally be sworn in, and he is already the source of many wild predictions and some of the most intense speculation in modern times. Based on the very small sample size of information that has been laid before us, how things will inevitably shake out remains to be seen. Being prepared for the worst case scenario might not necessarily be wasted effort, but I don’t know enough yet to even make an educated guess. The fear and anxiety is real enough, but those are two very different things. We know this much. Changes will occur that we strongly disagree with in basic principle, but they might further erode public trust more than bringing us to the brink of economic war with China or a hot war with Russia.

It remains to be seen whether Trump’s government will be an updated version of fascism for the 21st Century. Nazi ideology was extensively precise. I would never call Trump precise for any reason. According to its own perverse logic, Nazism was the very definition of a series of arguments based around purity, racial purity being only one of them. I don’t doubt that the billionaire Chief Executive-to-be is dangerous, but I think he may be more a sleazy new car salesman than an intimidating strongman. No one yet has focused on another potential outcome, if history is any guidebook to the future, the single term of Warren Harding, ninety-six years ago.

Harding’s government was the very definition of pay-for-play cronyism, crooked to the core in a way Hillary Clinton could, in Trumpspeak, never have begun to imagine. Almost overnight, the executive branch of the United States government took on the guise and persona of organized crime. The Mafia is unconcerned with purity arguments, rhetorical justifications, or reversing established precedent. It merely wants money, power, and the ability to propagate itself without outside interference. Corruption in government is not the harbinger of a terrifying new authoritarianism, it is merely old news in a new package.

How very strange that the electorate felt that it was time to drain the swamp and yet installed a leader who may do the very opposite by the time his term comes to an end. Hypocrisy in elected officials, especially those who sell themselves as saviors is another sad tradition in American politics. Back in 1920, a majority of Americans were weary of wars to make the world safe for democracy, nation-building an ocean away, and Utopian world alliances. And put that way, we’re really not that different now than we once were. The impulse to isolate ourselves from the rest of the world popular then was popular before.

I don’t think Donald Trump much cares to reverse Roe v. Wade or to recriminalize marijuana. Some of his cabinet appointees may take formal stances like these, but Trump is, to reiterate, not an ideologue. It is the opportunistic streak in many of those who have benefited from their loyalty and patronage that concern me most. They backed a long-shot candidate in the hopes of riding coattails to greater power and influence. Their primary allegiance is to themselves and to pad their own pockets. Bribery, influence-peddling, and graft on a grand scale will become enabled at the end of next month. No one is left to watch the store and without substantial oversight, liberties can and will be taken.

During the campaign, an argument advanced to elect Trump was that he was already too rich and too powerful to be paid off or unduly swayed. Though being President will hurt him in the pocketbook, Trump now has the world’s largest bully pulpit, which allows him the ability to exercise his strongest attribute, an inability to stop talking, Tweeting, or communicating something to someone else. Nixon’s downfall was initiated by underlings but proved his undoing by his personal efforts to cover up the crime. Trump’s problem is a little different. He is too undisciplined to keep subordinates from taking off with the store or settling old scores. True fascism requires lockstep devotion and supreme coordination. I really don’t see evidence of that here. The Donald is, to put it mildly, a mess.

It’s easier for progressive-minded people to voice their dissent by utilizing old methods, particularly by means of the umbrella term colloquially referred to as social justice. We can march on Washington for women’s rights and against global warming, but what control do we have over political favoritism and greased palms? Not that the issues lauded by many people aren’t important, but they accentuate how far removed we are from the mechanicians of K Street lobbyists and the halls of power. My purity movement or single-issue organization can oppose yours. I can reduce it to a bumper sticker slogan but short-circuiting the process from the outset is a different matter altogether. Activists find themselves playing defense more than they would like.

Even a Presidency as unpredictable and unconventional as Donald Trump’s is going to be easy to dissect in some ways. We may be losing sight of the larger picture in our haste to sound the alarm. President Trump might be no different than President Harding, which is bad enough. Harding realized too late that he’d been a stooge the whole time, that his supposed friends had used him from Day One. Trump is not naive and likely has lived enough in the public eye long enough to know that he needs to take care to look over his shoulder, but he may eventually reach the same conclusion. We as Americans can decide whether or not he is a candidate for our pity once that stage is reached. At the end, everyone’s been played.
Posted by Comrade Kevin at 8:23 AM