A Resurgence of Hope and Morality in Trump's America 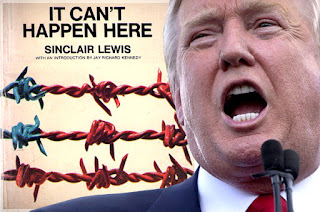 We as Americans are divided along political and ideological lines, surely, but what gets less attention is how divided we are along moral lines. Though I write as a person of faith, we are not yet so divorced from the notion of basic upright precepts that we no longer have any shared definitions of what constitutes acceptable from unacceptable behavior. One hopes we are not yet that cynical, nor that nihilistic, but a recent major election result has cast a pallor over that which constitutes decent and acceptable conduct.

Many of us on the Left have recovered from our shock long enough to unpack and deconstruct a variety of disquieting conclusions. One of them was the truly pathetic notion that a very large swath of Trump's defenders hypocritically supported a candidate brazenly antithetical towards any basic understanding, comprehension, or willingly implementation of Christian values. These voters might take care to be reminded of a passage from the New Testament book of Romans as appropriately tough medicine. Eighty percent of self-identified Evangelicals voted for the President-Elect, but must still come to grips with the base hypocrisy of their decision.

An cursory evaluation of the first few verses of Romans 13 might seem on its face to support the Trump regime, or for that matter any government currently in power of any persuasion.

Everyone must submit to governing authorities. For all authority comes from God, and those in positions of authority have been placed there by God. So anyone who rebels against authority is rebelling against what God has instituted, and they will be punished. For the authorities do not strike fear in people who are doing right, but in those who are doing wrong. Would you like to live without fear of the authorities? Do what is right, and they will honor you.


I find it difficult to believe that God could have placed Donald Trump in office as a sign of anything more than a painful reminder of how flawed and imperfect creatures we truly are. While I agree that all authority comes from God, how do we define “authority”? And furthermore, when does human authority exceed its earthly limit and push back against the divine will of God? In these days of Islamophobia, prejudice, and Black Lives Matter, can this statement really be said to be 100% true in every context? In my mind, this statement needs much further analysis. Paul of Tarsus, the writer of this Epistle, continues:


Let’s remember that in this time, Christians were still being openly persecuted by the Roman Empire. But to return to the passage in question, are these authorities really sent only for our good? Maybe in a best-case scenario sort of way, assuming their motives were pure, one might assert it, but I remain skeptical. This might have been a slightly overreaching way of ensuring that Christians didn’t find themselves thrown more eagerly into the dens of lions or publicly executed. Paul also claimed that slaves ought to be subservient to their masters, but that is an even thornier matter I will not confront here.

Pay your taxes, too, for these same reasons. For government workers need to be paid. They are serving God in what they do.


But I can’t argue with every statement in this book. Regarding the passage above, you’ll register no complaints from me here. Put this way, taxes should be viewed from a more liberal lens than a conservative one. They are societal and moral obligations that every citizen must participate in to ensure that government functions successfully. Everyone should pay taxes, from the super rich to the middle class, though I do not think tax burdens should fall heavily upon the backs of the poor. Government workers should reap the benefit of taxation, not greedy corporate capitalists.

These words alone contain deeper meanings than a cursory view might reveal. Christians have historically taken one of three positions regarding their role in government as expressed by this chapter. All Christians, likewise with most religious people, agree that we are to live at peace with the state as long as the state allows us to live by our religious convictions. That was the reasons why so many faith groups migrated to our country from the very beginning. For hundreds of years, however, there have been at least three interpretations of the form these verses are to take.

1. Some Christians take a fully separatist approach, like the Amish and some Old Order Mennonites. They believe that the state is so corrupt that people of faith should have as little to do with it as possible. The Amish believe that we already live in a fallen world.

Some Protestant denominations often take this stance as well, though not quite to the same degree. They prefer to raise their children and live their lives in a protective bubble of their own creation. Although they think that they should be good citizens as long as they can do so without compromising their beliefs, they firmly assert that they should not work for the government, vote, or serve in the military. One sees evidence of this system of belief within Orthodox Judaism as well.

2. Others believe that God has given the state authority in certain areas and the church authority in others. Christians and believers can be loyal to both and and can work for either. This is the stance most religious Americans take, or even most self-professed moral people adhere to, though they are cautioned in this chapter that they should never confuse the two. In this view, church and state are concerned with two totally different spheres--the spiritual and the physical. Each compliment the other but do not work together. They were never designed to do so and, as the thinking goes, they never will.

3. Still others believe that Christians have a responsibility to make the state better through direct action. In the past, temperance crusaders, abolitionists, and suffragettes all took this stance, using religious and moral justification as motivation for their actions. Many progressive people of faith, Quakers like myself being one notable example, also share this sentiment. They can show evidence of this politically by electing people of high moral principle who also mirror their religious values. They can also do this by seeking to live by example, serving as an influence for good in society. In this view, church and state together ideally work together for the good of all.

It should be stated that none of these stances advocate for full rebellion or a refusal to follow laws, unless moral standards are being clearly and unequivocally violated. And that in and of itself is a matter of interpretation and degree, a debate that will rage first in separate factions before it ever links together due to political expediency and odd bedfellows. What cannot be refuted is that we simply must be responsible, moral citizens. And it is my opinion that the nascent Trump government is neither responsible, nor moral. Though Donald Trump has not yet taken office, I am disturbed by his vast litany of incendiary statements and the quality and caliber of the mostly white men he has appointed to lead his government.

We have an opportunity in front of us to refuse to cave to coercion and political pressure. We even have a right to prevent some rights from being changed to great wrongs. But even if we do not identify as religious, we have one of three approaches to take. We can play duck and cover, cocooning ourselves inside a unreal environment of like-minded individuals. That's one choice. We can compartmentalize secular from the moral/religious and ensure that never the twain shall meet. Or, we can recognize once more that the personal is the political and that we cannot divorce morality and ethics from the process of governance and being governed. While I cannot stress overmuch that we cannot legislate morality ourselves, we cannot afford to have morality either legislated or jackbooted out of American society. The same is true for the American political process.

If you view yourself as a person of faith, a person of deep moral conviction, both, or some combination of the two, please consider my proposal. Every point in human history is unprecedented to some extent, but a few elements of human nature remain fixed and unchanging. What has worked before may yet work again. It is my own personal bias that I wish we would someday return to the Judeo-Christian roots that served us well for hundreds of years, but I also recognize that to some they have been tainted beyond all recognition. Still, if we are not people of faith, may we be still be people of great moral conviction and yes, even love for our fellow man or woman. If we retain this, the words of the prophets will not be proven wrong, and we may even redeem our own human fallibility in the face of great evil. This is our fight to win.
Posted by Comrade Kevin at 10:00 PM