Safeguards, The Electoral College, and Our Role 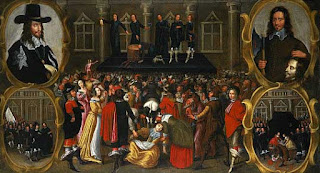 I have observed some of the frantic, last minute petitions to the Electoral College with a degree of bemusement. One or two courageous electors willing to not cast their votes for Donald Trump may be about the best for which we can hope. Not that I do not share their desire to erase the results of a mistake, but rather that I know we will not be let off quite so easily. The United States has had incompetent and ineffectual Presidents before. One needs only look at the procession of one-term, unsatisfying office holders in power immediately to the Civil War to see that much.

It is another event in history that portends better for us, if we want to truly understand the nature of who we are as Americans and the currents that made us the unique nation we are today. The Electoral College as an institution was designed as a means of protection, but we are seeking to interpret its function through our own eyes and for our own reasons. The truth is more complicated than that.

The Founders were all once British citizens. As such, they were well aware of the consequences of the English Civil War, which had concluded a generation before their birth. The French Revolution which followed its American counterpart is better understood, far more dramatic and radical, which makes for good storytelling. But it is the English Civil War of the misunderstood Seventeenth Century, sometimes called the Puritan Revolution, that is integral to connecting the dots between then and now.

The incompetent King Charles I was deposed and eventually executed, after somehow managing to anger and isolate every segment of English soil. It was a decision not arrived at lightly, and the English monarch was the first to lose his head in such a public fashion, an act that sent shock waves throughout the rest of Europe. The war itself raged for years, until finally reaching a conclusion that includes several confusing turns and counter-turns before its conclusion. The governing body of ordinary citizens known as Parliament took control, but the story doesn’t end there. Parliament could never reach consensus on matters of basic governance, which meant that the strong-willed Oliver Cromwell eventually ruled the island nation as military dictator for a decade.

And yet, after twenty years of experimentation, after being the first nation to rule completely without a King or Queen, Cromwell’s death inspired a renewal of the monarchy in 1680. This truly 360 degree turn did not happen overnight, as human nature, evolution, and basic recognition is usually gradual. On these shores, Prohibition was enacted with great struggle, tolerated uneasily for a decade and a half, and then eventually overturned by a more sober nation.

Precedent exists, but this is to say that nothing worth fighting for begins easily or ends quickly. We may think with our lightning-fast technology and push-button reality that major decisions can be made with a snap of the fingers. Humans are extremely creative and innovative creatures, but our basic evolution as physical beings is far more limited.

I think that an eventual Trump impeachment, provided enough time, is not unfeasible. He has ample baggage already pulling him down. One only hopes that he doesn’t cause the world significant, highly avoidable problems in the interim. We’re going to need a lot of adults in the room for the duration. Our Chief Executive is not going to be an example to emulate for a good long while. I’m trying my best to adjust, knowing that I will constantly be disappointed and discouraged for the duration.

The Founding Fathers constructed a government to improve upon the systems they had studied, and eliminate the flaws that they had seen elsewhere. They were quite familiar with the massive problems that had been created by a foolish king. Patience with a monarch who claimed divine right to rule had eventually given way to warfare and violence. But they operated from an Enlightenment point of view, one predicated upon supreme optimism, believing that scientific thought and reason could correct human shortcomings. They could not have predicted the pessimism of our age, and the desperation and cruel spite that creates leaders like Donald Trump.

We’ve collectively been trying to make sense of what has happened, but sometimes decisions made off of emotion, not logic, do not stand up to rational analysis. The Founders, if they were alive today, would ask us to apply scientific, measured precision to solve our problems. Every unfortunate situation provides lessons. Each age creates its own challenges and governments derived among men must take into account that it sometimes takes years for a nation to find proper footing and responsible leadership. I hope our sojourn in the woods doesn’t last any longer than it has to.

The United States of America does not have a clear direction of where it is headed, else it would have never entertained this reactionary notion in the first place. In order to be in line with those idealistic souls who put its very framework together, it must embrace a shared goal that renews hope and promises positive gain for everyone. We are currently too indebted to the shadows. Attaining what we need is possible, but it will place requirements on everyone to look beyond fear and loathing. We did not end up here overnight and our problems will not be easily cast asunder.
Posted by Comrade Kevin at 6:38 PM