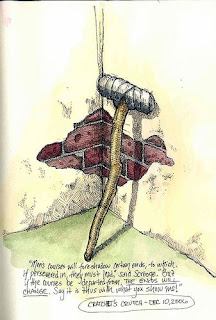 I’ve I’ve decided I’ll talk a break from politics a while to share a personal story. For a time I resisted writing about it because the pain was too fresh. Now, three months later, I’m finally able to talk about it in some detail. I write as much to share this story with you as to make sense of my own thoughts.

My wife’s mother died in October from an extremely aggressive form of stomach cancer. The family barely had time to say goodbye. Though her first symptoms presented themselves in January of this year, she was not formally diagnosed until August. The first stroke that left her unable to speak and largely inhibited occurred barely thirty days later. A mere month later following that she was gone, not before lingering in a comatose state for two weeks in hospice care before finally expiring. I was not present for that portion, my wife feeling it better that blood family only be present. At any rate, there would have been a limit to my ability to help, complete with that sinking, helpless feeling of waiting, day in and day out, for someone to eventually expire.

In some ways, the process of death was mercifully brief, but a more protracted period of illness would have allowed her mother the ability to make amends and say a final goodbye. As it turns out, she never heard the chance. Much is left unresolved, no doubt many grievances and final remarks forever unsaid. One of the double-edged benefits of an extended period of dying is the ability to make peace for all time, and that was a courtesy never granted my father-in-law, sister-in-law, and wife. My wife was not as close to her mother as she was to her father and I’m sure mother and daughter would have benefited for some heartfelt confession time, but this was not how fate played out, for better or for worse.

This Christmas will be difficult, as any first Christmas without a loved one. As an in-law, I am present for moral support, but there’s a limit to my effectiveness as counselor. My wife has turned inwards as a way of coping, inwardly detaching herself in ways that I find perplexing and sometimes alienating. I implore her to vocalize her suffering and the thought process that goes into it. Sometimes my verbal prompting provides results. Sometimes she retreats again into her head, which I find maddening, though I am not unsympathetic to the reasons why she has adopted such a system of grieving.

As she was not my mother, it still has not quite set in that she will not be present for the traditional unwrapping of presents on Christmas morning. In fact, I find it hard to believe that she is not still alive. I half expect her to be perched in her familiar alcove just outside the kitchen, welcoming us in from a long journey. Naturally, it is a million times worse for my wife, who was raised by the very person she has now lost and no amount of mental energy and good intentions will ever make me fully understand. I recognize that.

But if there is any redeeming value to Christmas, to the gathering together of family, I want to be part of it. I want to be a good husband, for whatever that means. I’m willing to grant her infinite patience, love, and understanding, even if it’s challenging. I come from a family of talkers and infinite verbosity. She regularly retreats inside her head, especially now, leaving me frustrated at a lack of feedback.

Christmas has multiple meanings, and I want to fit as best I can into what will be a likely sad and melancholy holiday. But surely there is joy in being together. What makes this particular gathering especially unfortunate is that under most circumstances this would be a day of great celebration. Instead it has been a reminder of a person no longer present and the ghosts and remnants of her that remain. I admit I’m not sure how to keep away these truly sad associations, or if that is even feasible.

But I have resolved that I will do the best I can the best way I can. As a family, it has been a tradition to watch together the time-honored film A Christmas Carol, the 1980’s made-for-television version with George C. Scott as Scrooge. I must admit I am reminded of the scene where Scrooge is confronted with the Ghost of Christmas Future, a future where Tiny Tim has passed on, leaving behind only his crutch. It is the metaphorical crutch of my mother-in-law that remains, still present somehow in our memories and in a few trinkets scattered here and there but also very much gone. This is the grief that does not recede easily and no doubt has lasting power.
Posted by Comrade Kevin at 12:30 AM