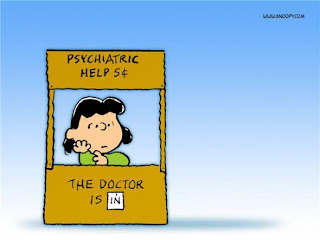 Time for a change.

I saw the same therapist for over two years, a tough love Israeli woman in early middle age. Unlike most Americans, she was neither effusive, nor gushy. She was, instead, restrained and reserved, but not remote. A therapist prior had been more than a little patronizing, often abruptly interrupting my train of thought. Thankfully, I found a trusted Hebrew confidante and co-conspirator. I would rather not leave her care, but I have no say in the matter.

The policies at the clinic have recently changed. I suppose money was a factor. Though long-term psychotherapy is the best course of treatment for me, it has been decided that shorter-term counseling is now preferred. The non-profit clinic gets more patients that way, even though I argued vociferously that my insurance has been a reliable source of income for them. New management always has its own ideas. No one was rude about the change. If anything, they were over-apologetic and over-accommodating.

My first impressions are usually accurate, but I'm going to try something different. For the next three weeks, I will be auditioning new psychologists. Over time, I've learned that it pays to be picky. If one can't develop a easy rapport between therapist and client, then one is merely wasting time. Shrinks tend to like me because I'm self-aware and brutally honest. Any regular reader of this blog knows that much. I tend to make their job easier and in the process get helped sooner, which is a win-win situation for both parties.

Much like lawyers, psychologists and therapists in private practice often have to hustle for business. In big cities, like where I live, there are simply too many of them. Money is to be made in cities, but the need is strongest in rural areas and small towns. This is especially true for medical practitioners. In part, the Health Care Reform Act was designed to address this shortfall. Whether it will or not is anyone's guess.

Perhaps then you can see how it isn't shocking that it didn't take me long to grab the attention of ten therapists. Within a day, I found myself fielding calls and e-mails left and right. One even called me while in the process of writing this post. Getting well is sometimes a full-time job and this starts well before one sits down on the therapist's couch. Half wanted a per session fee that I could not afford. Four of them offered a reasonable co-pay and take my insurance.

Session One begins at 2 pm this afternoon. When hard data cannot be found, supposition and initial impressions have to suffice. I'm going into this cold, without any advanced preparation. I've tried to look at the matter logically, though I recognize that aspects of personal bias often guide our decisions. At times, I concede that I've felt drawn to therapists who I find physically attractive, though I have resisted this impulse as best I can.

I'm really no different from anyone else, but I still seek to avoid projecting too many of my own feelings onto someone else. If the theory of transference holds up, I suppose I will over time feel a variety of emotions towards my therapist. But that's for later. I am left now with questions.

Who is a better fit? Someone close to my own age who has a shared frame of reference, but potentially less wisdom and life lessons? Or, should I chose someone old enough to be my parent, knowing that it may take a while to get on the same page with him or her? A purely objective viewpoint is impossible to ascertain, but I do want to be fair. In a therapeutic setting, I will say that I've never wanted a surrogate parent. I've wanted to speak with a contemporary and, for the most part, have been treated as such.

I won't know much of anything for a while. Again, I wish I didn't have to start completely over. It takes a while to get to know a stranger. The first two or three months are mostly extended introductions. Here I go again.
Posted by Comrade Kevin at 9:32 AM