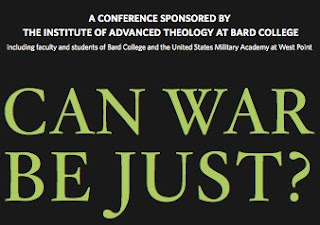 Each and every time the United States considers military action, those of us who are members of pacifist peace churches feel conflicted and torn. We protest, we march, we register our complaints, but almost everyone ignores us. Once again, we are the keepers of a frustrating, even demanding standard, brushed aside by the majority of Americans with the onset of hostilities. And in the end, even we wonder again if there really is such a thing as a just war.

Multiple ironies abound. Friends were born out of war, birthed out of uncertainty and upheaval. The English Civil War of the Seventeenth Century carried on for years with no end in sight. An intensely religious people, English, Scottish, Irish, and Welsh alike believed that God was somehow punishing them for their misdeeds. Any number of religions and nations have been formed in the fiery furnace of conflict and violent squabble. Indeed, should one examine every country's history and the history of many faith groups, the causes are very similar. When the world turns upside down, there is no limit to what might follow.

The concept of just war stretches back across the centuries. According to early Christian church leader Saint Augustine, who codified the concept, it requires that every single nonviolent effort of negotiation should be taken and exhausted before the war is declared. Furthermore, it demanded that no weapons should be used under any circumstances. Today, this would include bombs and explosive devices. Under this precise criteria, even World War II would not be considered a Just War.

If we are to start somewhere with our sober analysis, we should probably begin around two thousands years ago.


"You have heard the law that says the punishment must match the injury: 'An eye for an eye, and a tooth for a tooth.' But I say, do not resist an evil person! If someone slaps you on the right cheek, offer the other cheek also. If you are sued in court and your shirt is taken from you, give your coat, too. If a soldier demands that you carry his gear for a mile, carry it two miles.

This passage in the Gospel of Matthew has been controversial since the very day it was uttered. In a era less imbued with compassion and mercy than the current day, these ideas were radical and offensive. They still are. Since the advent of Christendom, religions, countries, alliances, and individuals have struggled to understand just what Jesus meant. A literal interpretation leaves no wiggle room, but many people have taken liberties with what the text says because it does not fit with their schemes and plans.

I happen to be part of a group that has taken this passage word for word. No war under any circumstance is the hard line I take. It's not easy and I doubt it ever will be. I do know that we as a race of primates and sentient beings are probably nowhere near ready to adopt this difficult challenge without consistently failing at it. We've been willing to entertain some of these notions in piecemeal fashion, but full implementation is, in my opinion, still centuries away.

Though many of us may not believe in any religion, much less Christianity, our beliefs about war are shaped by centuries of Christian thought. A little less than a thousand years following Saint Augustine, Saint Thomas Aquinas built upon the concept of his predecessor. Aquinas' approach was three-part.


First, just war must be waged by a properly instituted authority such as the state. (Proper Authority is first: represents the common good: which is peace for the sake of man's true end—God.)

Second, war must occur for a good and just purpose rather than for self-gain (for example, "in the nation's interest" is not just) or as an exercise of power. (Just Cause: for the sake of restoring some good that has been denied. i.e., lost territory, lost goods, punishment for an evil perpetrated by a government, army, or even citizen population.)

Third, peace must be a central motive even in the midst of violence. (Right Intention: an authority must fight for the just reasons it has expressly claimed for declaring war in the first place. Soldiers must also fight for this intention.)

These are worthwhile goals and aspirations, but difficult to put into practice. Are we seeking to win the peace, or is that very statement an oxymoron? This philosophy insists upon restraint and a higher purpose, but war by its very nature can easily become sadistic and bloodthirsty, especially when revenge and retaliation make savages of us all. It doesn't really matter who started it, but even as children on the playground we use that justification to back up our actions.

Now to the current day. Regarding Syria, we are engaged once again in a great discussion as to whether military action is necessary. I am preparing my metaphorical marching shoes for one more go-round. To use a sports analogy, I sometimes feel like I am part of a football team who, outclassed and out-manned, loses a series of close games to other squads with better players and superior talent. I content myself with moral victories, but I concede it would be nice to win every now and again.
Posted by Comrade Kevin at 9:24 AM