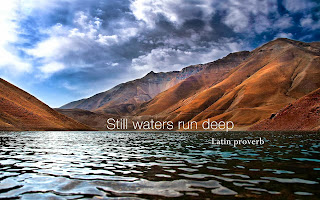 Those of you who have set up and moderated an internet-based board, website, or listserve know something of my frustration. Almost certainly, many of you have observed how easy it is for threads to derail or the conversation to be hijacked someone with an unresolved grievance. This is just as true for people of faith as it is for anyone else. Our conversations as a group may differ in content, but not in form.


For the past six or seven months, I've tried to establish some sort of order in an online setting that often teeters dangerously into anarchy. Repeatedly, issues that are supposed to be the purview of a twice-a-year business session are raised, begging to be debated. Regardless of whatever safeguards are in place, these strong opinions consistently bubble to the surface. I often feel like the mythical Dutch boy who puts his finger in the dike to prevent a flood from overtaking his town.

Trying to fight against this tendency requires constant work. Moderators can keep interceding ad infinitum when topics for business arise, in violation of policy. But it might be a better strategy to acknowledge that there's really no way to dodge substantive issues. If only being nice would work, or, at minimum, placing an arbitrary boundary to keep topics docile and kind. My activist side fights tooth and nail against this intent, though the older I get, the more I see the limitations of proclaiming all that is wrong with the world.

As Robert Frost put it, "Something there is that doesn't love a wall." I recognize that the point of this listserve is for casual informality, but it's much more complicated than that. Most posts are inevitably made by the same few Friends who want to keep it light and easy. But when a controversial or thought-provoking concern or topic is raised, I see participation on a scale twenty times the norm.

This listserve seems to have a kind of Jekyll and Hyde quality to it. Someone has to keep constantly intervening when we stray into areas that are off-limits, and that never changes. The problem never goes away. It's just delayed until the next incarnation. Sisyphus would be proud.

My Meeting had problems with intense opinions and frequent testiness on our listserve. The decision made then is the same one that I have made today. The Meeting chose to keep our original listserve for online announcements, and consigned a brand new one for opinions and discussions. This has succeeded in keeping sometimes hurtful, sometimes inappropriate conversations to a minimum.

Online discussions are often the beginnings of reforms and changes in policy. I'm not opposed to honest debate, even online, because our viewpoints tend to fester and smolder otherwise. I don't see many Friends who are truly committed to a completely hand's off approach about pertinent issues. There are drawbacks to internet discussion, certainly, but I've learned ways to block out the noise. The sorts of people who cause problems are often easy to diagnose and then ignore.

As the saying goes, still waters run deep. Good intentions are cast aside without a second thought when in the heat of debate. The temptation to conduct business online is too strong for too many. Some time ago, I shared an saying that I think is especially pertinent. Quakers have short fuses about politics and long fuses about people. There's a limit to what I can modify on my own. I have to work with the prevailing culture, even as I plan out my reforms and changes.
Posted by Comrade Kevin at 10:10 AM