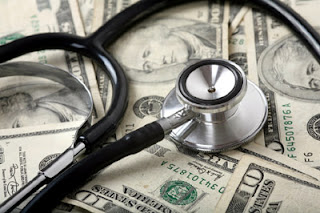 A recent article proclaims that the United States is the most expensive country to give birth. Though I admit that, as a man, I am incapable of giving birth, I do understand the needlessly inflated cost of health care. In Washington, DC, the young professionals who are my friends have placed procreation as a very low priority. The cost of living here for one person is expensive enough. Most of us have crunched the numbers and determined that being a parent simply isn't an option; it may not be an option for years.

I had surgery in March to correct an overactive bladder. A battery-powered device was inserted against my spine, next to the bladder. The procedure required me to be put to sleep for a little while. Even though it may have been a slightly delicate procedure, I was fortunate because it didn't take me long to heal. My insurance did cover the procedure, but when I received the charges in the mail, I recognized that there was no way I could have afforded it without coverage.

A couple of months later, my wounds healed, a lengthy itemized statement arrived in my mailbox. It listed each charge submitted to insurance. They were numerous and entirely excessive. Though the surgery was performed in two steps, the total bill ran to $20,000. Without going into too much detail, the surgery was necessary because I'd been having to urinate upwards of thirty times a day.

My bladder was chronically irritated and spasming regularly. The spine emits electronic pulses to the bladder to indicated when it is time to empty itself. The pulses were chaotic and much too frequent, which is what necessitated the surgery. The battery powered device provided the proper amount of signaling and allowed me to not have to live my life within ten paces of a bathroom.

A fellow Washingtonian, Marguerite Duane, had a similar experience of sticker shock for her pregnancy.

Because her policy stated that she was responsible for 20 percent of the costs, she carefully kept track of every service she received.

Duane, a physician herself, was stunned when she saw the bill, riddled with mistakes, for $6,000.

“I was billed for two hospital nights, each was charged to $2,241.60,” she said. “I was charged for medications I didn’t receive, such as oxytocin. And it was $958 for his nursery stay — and he didn’t spend one minute in the nursery.”

Even after Duane got the delivery bill corrected — after 15 months of negotiations — the total cost of having Ellis was huge. When she added it all up — including prenatal vitamins, radiology, midwife bills, labs and hospital fees — the final tally was $9,442.41, with Duane’s share a stunning $1,912 out of pocket.

After years of chronic illness, I have examined the system and find there is much fault to go around. Finding an easy target is anything but simple and cut-and-dried. One could blame the doctors, except that I've developed working relationships with them and have come to understand their perspective. The insurance companies are a popular scapegoat, and I do admit that I've often struggled to get medications covered. Prior authorizations before drugs will be dispensed to the patient are a way for insurance companies to save money. They require additional work from a doctor, nurse, or both to justify why a particular medication has been prescribed.

Everyone I encounter knows that the system is broken, which was the reason for the landmark health care reform legislation. Repealing it, or at least gutting it beyond all recognition, is the Holy Grail for many Republicans. My fear is not that this nullification language will succeed, but that the message will remain garbled. I am confused and perplexed, not understanding why the guts of the law has not been properly explained. If the opinion polls are to be trusted, I'm not alone. In fact, I'm in the majority.

At the moment, I trust no one's facts and figures. Ironically, I thought I had a better understanding of this reform legislation when it was being put together, three and a half years ago. Instead of sweeping reform, I've instead picked up on minor changes here and there. Medical records like X-rays must be digitized and computerized. X-ray film can no longer be used. Prescriptions, by next year, will all be electronically sent to pharmacies except for controlled substances. These will still be written down on paper.

Duane had tried to estimate the costs beforehand so the family could put aside money for the entire pregnancy — but that proved to be impossible.

And it’s not just a case of one woman and one hospital. NBC News called a number of hospitals around the country at random and was able to get estimates for delivery costs. But, here’s the daunting part: When NBC News called the same hospitals at different times, the prices quoted were different.

This is the problem, among many. Hospitals will charge as much as they can to extract the most profit possible. They claim that because health insurance companies pay out at different rates, the bill differs for each patients, depending on insurance carrier. If flat fees for services were in place, costs would be standardized. But as it stands now, our health care system is a patchwork of private and public. Medicare Part D, the prescription drug coverage for the retired and disabled, is a melding of private companies who have contracted with the Federal Government.

This duality reflects our values and priorities as Americans. Many of us are turned off by the idea of complete government control of our health care system, however unlikely it might be. They fear that their care will be rationed. They worry about long waits for surgical procedures. And this is why we have a capitalist patchwork of private carriers, which usually works well, provided your employer can afford it and provided you can afford the out of pocket costs.

Medicare often requires additional steps to be followed before it agrees to cover certain procedures. For example, I have obstructive sleep apnea, which is corrected with a CPAP mask. The mask is made out of soft plastic and eventually wears out with time. I am required to meet once every year with the specialist to ensure that I continue to receive replacement parts as they are needed. Private insurance does not have this same requirement in place. Once it has its money, it doesn't care about much else.

Most of us view health care as a right, but until we lose coverage or see our co-pays increase dramatically, we rarely think about it. The changes to come have been poorly defined; we do not know what to expect. Is the law itself too complicated to be easily explained? In any case, not knowing what is to follow in 2014 is giving credence to Republicans who are fanning the flames by stating that Obamacare is some sort of job killer. In reality, everyone's projecting his or her own worst fears when actual information would put an end to idle speculation.
Posted by Comrade Kevin at 8:45 AM