Picnic at Hanging Rock: A Review 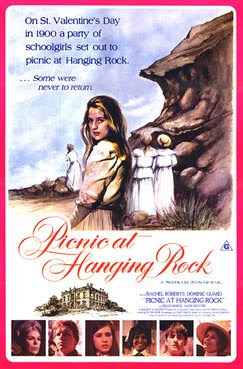 Director Peter Weir's 1975 film Picnic at Hanging Rock explores the contradictions of Australian culture, circa 1900. On an expansive, still largely unsettled island, the British have tried to import their haughty, tight-corseted ways into a provincial land of open spaces and wild animals. Never is this distinction more clear then at Appleyard College, a very proper all-girls private school. Victorian ideas towards sexuality are those of repression and restraint. The spotless white dresses and parasols displayed by each student mark that distinction strongly. It was thought that the dress suppressed desire in others, presumably males. Even a glimpse of ankle was considered shocking.

Though directed by a man, the novel upon which the film was based was written by a woman. Joan Lindsay is best known for the novel of the same name as the film, which she had written close to a decade before. In keeping with the book, there are multiple aspects of the film that are full of lesbian subtext. Though never stated directly, one of the girls, Sarah, is shown to have strong same-sex feelings. Her love for Miranda, a fellow student, is particularly emphasized in one scene. Miranda appreciates the desire, though cautioning Sarah that she ought not get too attached, as she knows she'll be leaving shortly. The scene reminds me of the equally controversial film If..., completed seven years before, where the setting is an all-boys school. A character notes, "All this homosexual flirtatiousness--it's so adolescent." Adolescent or not, it's the way things go at Appleyard.

Matters are quickly to change. Upon a Valentine's Day outing to Hanging Rock, an large outcropping of volcanic stone, the routine event at first passes without much fanfare. But it is when four of the teenagers, plus a teacher, request to scale the rock and take measurements that tragedy strikes. The women never return and the rest of the party returns late at night in hysterics. Efforts to find the four missing persons all produce nothing. Subsequent efforts turn up nary a thing. Speculation as to what really happened makes the story worldwide news. Rumors fly. And yet, there is no resolution to the crisis.

A British transplant by the name of Michael observed the girls briefly before they disappeared. Trying his hand at rescue, he plans to scale the rock formation in the hopes of finding the four missing girls and teacher, but is overcome somehow by the exertion. He is later found lying prostrate on the rock, delirious and with several wounds across his body. When he is strong enough to speak, he finds he cannot explain what has happened. Nor can he explain where he found the fragment of lace from a woman's dress that he was clutching in his hands when discovered. Immediately afterwards, a valet, himself a native and familiar with the area, discovers one of the girls. She is wounded and unconscious but very much alive. Regrettably, she too remembers nothing about what happened to her companions, nor herself. It is noted that she is not wearing her corset, but the news goes unreported on purpose. A woman not wearing one in those days was said to be advertising her sexual availability.

With a deliberately mysterious and vague ending, what happened precisely to the girls and the teacher is up for debate. Some believe that the primitive, natural aspect of Australian culture, in the form of some supernatural force, deliberately and violently rejected the more civilized British attitudes foist upon it. Taken this way, it's a kind of conflict between the rawness and authenticity of the wilds and the carefully controlled attitudes of a foreign and ill-suited invader. Some have assumed that it speaks to the tension between Aborigines and British inhabitants that still exists today. Regardless, the viewer is actively encouraged to superimpose his or her own meaning onto the ending, and that would be you and me.

Posted by Comrade Kevin at 3:51 PM