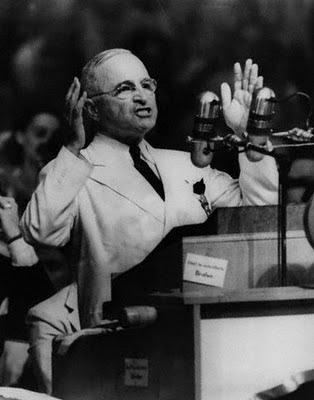 Does any of this sound familiar? What sounds unfamiliar?

Senator Barkley and I will win this election and make these Republicans like it -- don't you forget that. We'll do that because they are wrong and we are right, and I'll prove it to you in just a few minutes.

This convention met to express the will and reaffirm the beliefs of the Democratic Party. There have been differences of opinion, and that's the democratic way. Those differences have been settled by a majority vote, as they should be. Now it's time for us to get together and beat the common enemy -- and that's up to you.

We have been working together for victory in a great cause. Victory has become a habit of our Party. It's been elected four times in succession, and I'm convinced it will be elected a fifth time next November. The reason is that the people know that the Democratic Party is the people's party, and the Republican Party is the Party of special interest, and it always has been and always will be.

I'd like to say a word or two now about what I think the Republican philosophy is; and I'll speak from actions and from history and from experience. The situation in 1932 was due to the policies of the Republican Party control of the Government of the United States. The Republican Party, as I said a while ago, favors the privileged few and not the common everyday man. Ever since its inception, that Party has been under the control of special privilege, and they concretely proved it in the 80th Congress. They proved it by the things they did to the people, and not for them. They proved it by the things they failed to do.

I suggested that the schools in this country are crowded, teachers underpaid, and that there a shortage of teachers. One of the greatest national needs: more and better schools. I urged the Congress to provide 300 million dollars to aid the States in meeting the present educational crisis. Congress did nothing about it. Time and again I have recommended improvements in social security law, including extending protection to those not now covered; increase the amounts of the benefits, reduce the eligibility age of women from 65 to 60 years. Congress studied the matter for two years, but couldn't find time to extend or increase benefits. But it did find time to take social security benefits away from 750,000 people, and they passed that over my veto.

Now everybody likes to have low taxes, but we must reduce the national debt in times of prosperity. And when tax relief can be given, it ought to go to those who need it most, and not go to those who need it least, as this Republican rich man's tax bill did when they passed it over my veto on the third try. The first one of these tax bills they sent me was so rotten that they couldn't even stomach it themselves. They finally did send one that was somewhat improved, but it still helps the rich and sticks the knife into the back of the poor.
Posted by Comrade Kevin at 6:37 AM