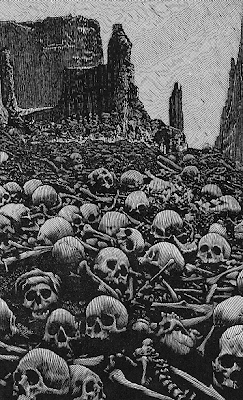 We are increasingly consumed with pessimism and worry in these times. Indeed, it is easy to believe that some end is near, regardless of what form it should take. Or if some end does not face us, we ought not to expect any positive outcome. The threat of continued decline and uncertainty is omnipresent in the minds of many. A certain doom and gloom scenario has long rested in the back of the liberal mind. Yet in such circumstances, I return to one of the most vivid and inspiring passages I have ever read. It promises no easy solution, but it does provide needed hope.

The prophet Ezekiel was born, lived, and worked during an immensely trying time in Israel's history. God's purpose for his life was to turn the people of his nation away from sin, back to religious observance, and his land to its former prominence. In what follows below, he experiences a vision, one which is meant to be taken symbolically and also to have many applications. It seems especially appropriate for these times.

The hand of the LORD was upon me, and he brought me out in the Spirit of the LORD and set me down in the middle of the valley; it was full of bones. He led me all around among the bones that covered the valley floor. They were scattered everywhere across the ground and were completely dried out. Then he asked me, "Son of man, can these bones become living people again?" "O Sovereign LORD," I replied, "you alone know the answer to that."

Then he said to me, "Speak a prophetic message to these bones and say, 'Dry bones, listen to the word of the LORD! This is what the Sovereign LORD says: Look! I am going to put breath into you and make you live again! I will put flesh and muscles on you and cover you with skin. I will put breath into you, and you will come to life. Then you will know that I am the LORD.'"

So I spoke this message, just as he told me. Suddenly as I spoke, there was a rattling noise all across the valley. The bones of each body came together and attached themselves as complete skeletons.

Then as I watched, muscles and flesh formed over the bones. Then skin formed to cover their bodies, but they still had no breath in them. Then he said to me, "Speak a prophetic message to the winds, son of man. Speak a prophetic message and say, 'This is what the Sovereign LORD says: Come, O breath, from the four winds! Breathe into these dead bodies so they may live again.'" So I spoke the message as he commanded me, and breath came into their bodies. They all came to life and stood up on their feet--a great army. Then he said to me, "Son of man, these bones represent the people of Israel. They are saying, 'We have become old, dry bones--all hope is gone. Our nation is finished.'

So prophesy. Tell them, 'This is what the Almighty LORD says: My people, I will open your graves and take you out of them. I will bring you to Israel. And you shall know that I am the LORD, when I open your graves, and raise you from your graves, O my people. I will put my Spirit in you, and you will live again and return home to your own land. Then you will know that I, the LORD, have spoken, and I have done what I said. Yes, the LORD has spoken!'"

Even when things seem hopeless, God can breathe life into dry bones. Perhaps we are led to the same service as Ezekiel, to a task that seems impossible at first. It has been my experience that with God, absolutely nothing is impossible. These bones represent spiritual death, either of an individual or a group of people. Observant Jew that he was, Ezekiel could have griped that his very presence among these bones had made him unclean. These dead have not been properly buried. They lie strewn about in a mass grave of a sort. But his very fate lie with these bones and whatever physical discomfort he might have felt was subordinate to the task at hand.

In the whole of my own ministry, regardless of where I am or what I am called to do, at the outset I often feel as though I am encountering Ezekiel's Valley of Dry Bones. The task may seem daunting at first, but careful discernment and listening to God has produced such satisfying results. The same may have been true for you. But God is always willing to breathe life into these old bones, whatever they may be, or whatever form they may take.
Posted by Comrade Kevin at 6:34 AM