Haiti: A Well-Regulated Relief Effort Being Necessary for Everyone's Security 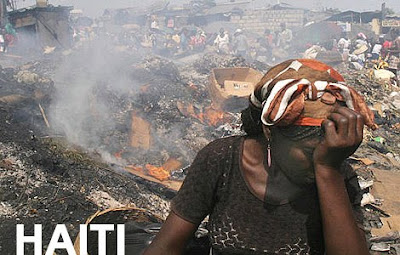 Earlier today, I was returning from meeting by bus. After having boarded and taken my seat, I settled in for what I anticipated would be a relatively short ten minute ride. Instead, the traffic on Massachusetts Avenue over by Embassy Row snarled to a complete halt. The weather today in Washington, DC, had been dreary with constant rain, so I assumed first that we had merely run into the aftermath of a traffic accident. The three police cars with flashing lights parked on one side of the road seemed to do nothing but confirm my assertion, but as we inched closer and closer, I recognized that I was very wrong.

At least one church van, scores of automobiles, and at least 100 people had parked next to the Haitian embassy. I saw people opening the backs of minivans, sedans, and passenger cars, each carrying sacks of provisions that were soon stacked in the front lawn. Braving the rain, the generosity of DC area residents had already deposited an impressive amount of badly needed items that would soon be categorized and shipped to the ravaged country. So far as traffic jams are concerned, that was one of the best.

The outpouring of aid, both in material goods and in money has been overwhelming. It is true that the infrastructure on the ground needed to properly allocate the generosity of the world is often woefully insufficient, or lacking altogether, but at least we are taking forceful and desperately needed steps to help the citizen of Haiti. Some will point out that we had a role in the crippling poverty and rampant corruption of the island nation. Some will say that we should have been doing this very same thing all along. Though they are correct, we shouldn't overlook that at least we finally, collectively, proved that we have a heartfelt and passionate desire to give assistance to those dealing with the devastation and agony of a complete catastrophe. In this regard, we gave freely and openly, with no grumbling or reluctance, and ought to be commended for it.

I recognize that it is certainly difficult not to politicize natural disasters. Jon Stewart earlier in the week gently chided us that even though Obama's response to this crisis has been far better organized and responsive than President Bush's bumbling of Hurricane Katrina, we might consider taking the high road. Even so, this response to Haiti is, let's be honest, also motivated by a compulsion to not make the same mistakes as some did with Katrina. As if we needed to be reminded once more, we have a powerful memory of how for several days our government seemed utterly impotent, completely unable to manage the crisis response that was needed. That especially sordid affair was a black eye not just for President Bush and the GOP, but also for every American citizen. It is fortunate that we have not forgotten it or overlooked its basic lesson.

At moment, many liberals and progressives I know feel a compulsion to make a statement that we and our President, by God, can manage a proper humanitarian effort much better than the prior Administration did. That might not be the sole motivation behind this effort, but it is there and it does exist. Some find this regrettable, but ideology and with it the desire to be on the winning team manages to creep into every decision despite our best efforts to look beyond it. If there had been no Hurricane Katrina, then we would not have realized that government has severe limitations in and of itself and that as such it is contingent upon us as citizens to sometimes take matters into our own hands, recognizing that government functions best when we take an active role alongside it.

Indeed, this was how American government as originally proposed was supposed to look. It is in situations like these we see the handiwork of our Founding Fathers. If only we could apply this realization to all other facets of government that require not necessarily our financial gifts, but certainly our direct and steady hand on the tiller. If only we learned from so many other situations clumsily or inefficiently dealt with, and used those as the means by which we improved upon the failure of government and governance.

Conservatives like to cite the Second Amendment as justification that gun control laws ought not to exist. My intent in bringing this up is not to speak to its overall intent, but rather to focus on its construction. The first part of the amendment reads,

A well-regulated militia being necessary to the security of a free State...

Well-regulated in this context means an active and involved citizenry who band together for protection and in so doing take the initiative to be prepared against enemies and threats to its sovereignty. Somewhere we have gotten away from the idea of being well-regulated, well-prepared, and proactive towards the plethora of problems which face us all. The notion of Democracy as advanced by our Founding Fathers was that of a nation of individuals who could be safely relied upon to, as needed, band together when needed and prove to be effective in opposing threats. That we have in this day and age opened up our wallets, our hearts, and our free time to unselfishly assist a nation in peril speaks well of each of us. That it happened in response to something absolutely awful is unfortunate, but I suppose learning from the lessons of Katrina honors the memory of those who perished in the floods, lost their homes, or were forced to relocate. If one tragedy is the impetus by which we regain our humanity, then Katrina's victims will not have suffered in vain.

In saying this, I wish I could say that messages like "Never Again" have a resonance well beyond the immediate horror. As a student of history, I know that every event slowly fades into the background, even those of the most horrific nature. What I do realize, also, is that even when the actual collective memory of the worst natural disasters subsides, an obligation to care for one's fellow person carries on if it is advanced from then on as part of a cultural imperative. We might not recall Katrina in a century from now, but if we make a point to preach compassion and care for those in crisis, we will not forget. We might today give $5 or $10 to pay for medical care, food, or essential supplies for earthquake survivors, but if we keep in mind that caring for the needy is not a seasonal obligation or an occasional emergency relief package, then we will not forget the lessons of Haiti.
Posted by Comrade Kevin at 2:08 PM

I hope the resources people are generous in donating can get in the hands of those who need them very quickly.

I have a strong desire to offer a home, even if temporary to a child whose parents or family was killed, though I know there is nothing whatsoever practical about that desire. Some day, I hope I can do that, give a child a home who needs one.