The Light Has Its Own Agenda 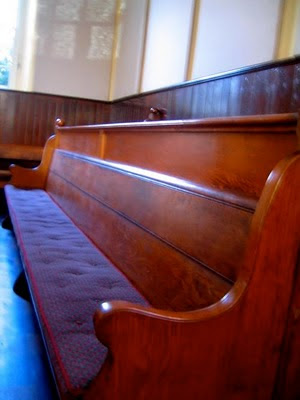 Before I begin this post, let it be known up front that I wish I didn't have to write about this particularly regrettable anecdote. My point in putting it out there is not to shame or to call out anyone, but rather as a gentle reminder of where focus needs to be during worship. It is an unfortunate fact in many churches, meetings, or spiritual gatherings that those who propose or set forth ideas that advocate reform are met with either hostility or much discomfort. This fact above any other is the real reason that inspired what was said last Sunday during worship. I have been the voice of change in what I have said in past vocal ministries over the past several weeks and some people feel change in an form to be frightening or discomforting.

Suffice it to say, I have already forgiven the person for what he said. I try not to hold grudges and I make an honest attempt to live that which I espouse. At times I have let my own reservations and anger lead me to places where I am later ashamed to have gone when my frustrations subside, and this is why I am writing about what happened several days after the fact. What happened needs to be noted, but it needs to be noted in a spirit of love, not a spirit of spite.

Unprogrammed Quaker service, for those who have no prior knowledge of it, has been described as an exercise in religious anarchy. We have no ministers, priests, vicars, deacons, rabbis, imams, or designated worship leaders. The traditional Western style service is a largely passive endeavor, where the laity sing selected hymns, listen to sermons, are serenaded by choirs or at least some degree of music, and largely do not participate in the service itself. In our service, which is often called First Hour, we sit in silence until someone feels called to rise and give a message, a vocal ministry, if you will, directly inspired by the Inner Light of God. After this message is given, we contemplate it for some time, after which someone else may speak and give an additional vocal ministry, one inspired by the one that came before it.

Sometimes the Light instructs me to sing. I have a good voice, a true gift from God, and I always give thanks to my higher power that he gives me the courage to put myself out there in front of other believers. Ordinarily, I am a very shy, very introverted person slow to warm up to strangers and frequently inclined to avoid interpersonal communication out of fear of humiliating myself. As I feel the Light moving within me, my nerves and my fears are formidable foes, but somehow God's strength and God's purpose conquers my terror. The first few words or the first few bars are frequently quavering and weak, but as I put them out there, my confidence grows and after a few tentative seconds I know I can manage to overcome even pathological shyness.

Last week, I rose, I sang, and then I sat. A couple minutes later a man rose and rather sarcastically mentioned that how fortunate we were that the meeting house was not a performance space. The implication was that clearly I must be showing off and, speaking more to his actual spoken words, evidently his conception of vocal ministry did not include singing. In addition to not being the most Quakerly of sentiments, I felt it a bit unfair. Indeed, should I be ashamed of the fact that I have a good voice? Should I go against the desire of God to share my talent with all?

I make my decision to speak, sing, or sit based on the guidance of the Light. If the Light told me to sing every week, I would sing every week, but it does not. If the Light told me to sit in silence every week, I would surely follow its guidance. For some reason, the Light fills me with a compulsion, if not a demand to rise and share a message with all who are gathered. It is a command I often grapple with, since I am probably the least likely public speaker I know. And recently it has instructed me to rise almost every week. As soon as I am seated, I am filled with abject terror and fear that I have somehow debased myself in front of the entire meeting, but I have not. Again, these are merely my own phobias speaking, but it is a testament to the power of the Light that someone whose anxiety is so intense that he has to take medication for it can overcome even the most pervasive of physical ailments.

Every subsequent speakers defended me against what the man had said. The first woman to speak concluded her ministry by noting, "Why are we are war, Friends?" By this she was questioning the need for such a negative, abrasive response that appeared to almost everyone as unjustified and deeply petty. I never seek to be a polarizing figure at meeting and never seek to invoke any kind of response that radiates an undercurrent of ugliness and division. I know at times I have called out the elephant in the room in a hopes to foster growth among fellow Friends, but my vocal ministry last week was a rather uplifting message, or so I thought.

The gist of it was fairly straightforward, at least to me. In it, the Light spoke to my parent's generation. The song address how their generation started out with idealistic dreams and a desire to change the world, then got bogged down by the harsh realities, felt frustrated at how resistant the world was to change, and now, as older adults, saw its children embrace this same idealism and desire to make the world over anew. In a complete rebirth, their own offspring took on the causes and the energy that had driven them in a younger incarnation. In its conclusion, the song proposed that perhaps idealism was the right response after all, and that the cruel, inflexible world was completely wrong in its soul destroying, cynical attitude.

Every meeting is comprised of personalities and I do recognize that some of them have very particular ideas of what constitutes acceptable and kosher. I should probably add here that the first time I sang in meeting, a sweet older woman talked to me after worship and informed me that, as far as she was concerned, I could sing every week if I wanted to. Again, if the Light instructed me to sing on a regular basis, I would. The point has never been for me to receive accolades or to be praised for the quality of my vocal ministry. I have a hard enough time taking compliments and I'm shy enough that when some stranger idles up to me after First Hour to make contact, and instantaneous part of me wants to run and hide. Certainly it is nice to be praised in any context, but I'm more inclined to marvel and ask why God has used me as an effective mouthpiece. I try to keep that in mind whenever possible, and recognize that if I raise my voice in song or in words, it is for the benefit of all who would listen, not to reinforce my own self-image. That is sometimes a difficult challenge, but it would be a much greater one if I really was this outgoing extrovert with a carefree demeanor.
Posted by Comrade Kevin at 2:09 PM

This story is how I remember Every church I've ever been in- and the reason I don't seek god with others. "Fellowship" is, in my opinion, something that should be sought in parallel to seeking god.

Man is an imperfect being, and this imperfection is magnified when a man is confronted by something that makes him feel even less perfect than he normally does. And its hard to seek God when you have to be concerned with the asshole next to you spewing forth his imperfections in such a tourettes like manner.

Don't let the foolishness of those around you detract from whatever connection with god you can manage. I feel sorry for him, because instead of seeing you connect with something bigger than yourself, he only saw and heard a fraction of what was really occurring at that moment.