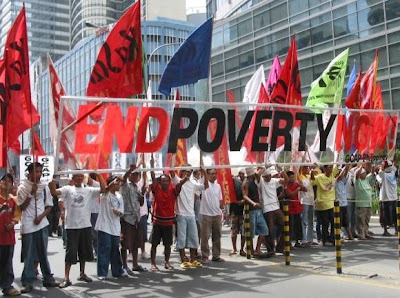 The circular firing squad over the defeat of Martha Coakley and what this means for the Democratic Party and Health Care Reform got underway a couple days ago. I've said my bit, and have nothing further to add, but I'd rather address the potential challenges facing reform aside from the loss of a seemingly filibuster-proof majority. It is now absolutely imperative we push forward and bring a bill to President Obama's desk. Our backs may be against the wall, but perhaps it will take abject panic and fear to rouse our complacent, weak-kneed Democratic legislators towards the goal. If it takes the shock and dismay of a humiliating defeat to break the logjam, then so be it. I'm not concerned with speculating as to how we got here; I am instead consumed with what we learned from it and how we will use this tough lesson to think of others and their needs rather than ourselves.

What I have noticed in my own struggles to obtain low-income health insurance is how class and race ensure that government subsidized plans are underfunded and often dysfunctional, but money (or the lack of it) seems to be the most powerful determinant of all. What many have noted is that basic selfishness is what threatens to derail any efforts towards changing the existing system---namely that people who have always had sufficient coverage do not understand the limitations faced by those who do not. We can call that privilege if we wish, but that term has always seemed accusatory to no good end to me, and my intent is not to chastise anyone but to make many aware of the challenges in front of us that never get much in the way of attention. In my own life, I can say that I have now seen how the other half lives for the first time ever, and I noted that they live lives severely impeded by the tremendous limitations and senseless complications of the existing system.

I have been unemployed or at least severely underemployed for several months. As a result, I had no choice but to file for government assistance. When I was finally granted food stamps I signed up as well for a local DC funded health insurance plan. What I have discovered in the process is that since the Recession hit, social service agencies in DC have been swamped by new applications for every existing option currently offered. According to one worker with whom I spoke, claims have tripled since the bottom began to fall out of the economy. The system was barely able to manage the number of filings in more stable times, and now it has in large part ground to a halt if not slowed to a trickle. New claims are supposed to be processed in no more then 30 days from approval, and I was forced to make several time-consuming, additional calls to the proper department to even get the coverage activated. Those without the time or without the persistence likely will be granted nothing at all and this simply should not happen.

My great point is that without the infrastructure in place, it doesn't matter how many people to whom we grant coverage. Ensuring that everyone can get their teeth cleaned, fillings filled, broken bones set, flu-like symptoms properly treated, diabetes regulated, or depression adequately under control is the ultimate goal, but we must also be sure to build a sufficient number of clinics, medical centers, doctor's offices, dental hygiene practices, well-stocked pharmacies and all the rest. They must be built in proper proportion to need and since humankind has never been able to curtail its zeal for making money at the expense of the health of the financial system, we need to devise strategies to build these things for both good times and bad.

In DC, the low-income, government-funded system forces the poor and/or disabled to a handful of centers scattered across the District itself. Visiting a private doctor or specialist is not an option, since coverage is only granted to those who use these designated centers. Likewise, pharmacies and medication dispensation function under the same parameters. Using Walgreens, CVS, Rite Aid, or other commercial medication fillers is not allowed under the plan. Though there are a score of specific pharmacies which take the DC plan, in my case, there is only one pharmacy in the entire District that fills psychiatric medication, and for me it is a 35 minute trip, one-way via public transportation and then by foot. The pharmacy itself is attached to a Mental Health services clinic which is the sole site whereby psychiatric care is provided for a city of roughly 600,000 people.

Without enough workers to process claims, grant coverage, manage medical records, or attend to even the most basic of needs the system is essentially worthless or at least incredibly inefficient. Without enough revenue allocated by governments from taxation or other means, it doesn't matter how snazzy or up-to-date is any system designed to speed up or modernize the system. Window dressing is window dressing. Without the money to properly stock a pharmacy, medications will be obtained on a priority system and as such, meds that are rarely prescribed or are very expensive will rarely be on hand when needed. For example, one of my medications, Parnate, is an MAOI inhibitor. Parnate is a very powerful anti-depressant that is infrequently prescribed because with it comes potentially dangerous, even deadly side effects if I do not take care to abstain from eating certain foods. As you might expect, it is not one of the more common prescriptions, but it is essential to my lasting health and quality of life. A commercial pharmacy usually has it in stock, or if it does not, it can be quickly ordered or is certainly in stock at some other store in the immediate area. With the government-subsidized pharmacy I must use, if that particular drug is available at all it is due purely to chance and luck, and if it needs to be ordered, it may be a week or more before they have it in stock.

Regarding visits with a GP, specialist, or other specific health practitioner, some clinics and centers accept walk-ins or schedule appointments within a reasonable time frame. Some do not. For those who need surgical procedures or more invasive treatment, one might be expected to wait months. When I still lived in Alabama, there was approximately one Medicaid-accepting clinic for the entire state that performed the procedure, and as such when it came time for me to have a very routine, non-invasive treatment, I was booked four whole months in advance. In more affluent, usually blue cities and states, the wait time is often less, but it can still be a bit on the lengthy side. As for me, I found to my utter dismay that my coverage was terminated before the procedure could be even performed after the clinic filed and billed Medicaid for the cost of the preliminary screening. Someone must have realized that to save cost I was not what they deemed a "high-priority" need and thus I could be safely removed from the rolls to save money in what was a system already in danger of being completely depleted of funds.

An important distinction needs to be drawn here. The DC-based coverage I have been talking about is different from Medicaid or, for that matter, Medicare. This coverage augments or seeks to provide coverage to those who either have Medicaid/Medicare or cannot get approved for it. This is why the rules, parameters, and hoops to jump through are more severe. Medicaid usually allows a person to pursue more orthodox means of seeking treatment. Though some medical practitioners do not accept it because it usually pays out less than a gold standard coverage plan through a private insurer, many do. Again, money is a big factor at play. If Medicaid were capable of paying out at a sufficient rate, everyone would take it. If it wasn't at times forced to pay out much later than a private carrier or even being forced to issue IOU's when monetary shortfalls and partisan bickering delayed enactment of a satisfactory state budget, then it certainly would be on par with usually employer-based coverage.

Yet, it is very disingenuous at best for those who oppose health care reform to stubbornly dig in their heels and express haughty indignation that they are NOT going to have "the government" take away their right to choose their doctor. The only way this would ever happen for most is if they lost their insurance altogether, lost all their personal savings, and lost the ability to come up with the money to see a well-compensated physician and/or specialist. Their worst-case-scenarios and numerous reservations are true only for those living in abject poverty, or at or below the poverty line. The wealthier among us have any number of lifelines, be they family, co-workers, friends, fellow members of a particular group or club, or other sufficient means. Those at the bottom have none of this upon which to rely. Friends, family, and others are just as impoverished and less fortunate as they are, and they have no choice but to take and use what they can get. And taking what they can get means dealing with a system that is convoluted, needlessly complex, inconvenient at best, and regimented to such an authoritarian degree that even obtaining the minimum often is an exercise in debasement.

If ever we had a need for revolutionary reform and change, now would be it. Decades after a declared War on Poverty, we still have many battles ahead of us. We haven't really given this matter anything more than perfunctory attention, and we haven't really allocated resources of any significant means to this very pertinent cause. Doing so would require us to understand exactly how fortunate we are to have been granted, by complete luck and chance, the socio-economic status of which we were born. For some quirk of God, fate, or nature we do not get the right to choose our parents or to choose our upbringing. But we do have the obligation to see to it that those for whom daily adversity is not an abstraction have the same rights that we frequently take for granted. I am not seeking to lecture, nor to hector anyone, but rather to strongly emphasize that our continued success as a people, a party, and a movement demands that we seek to assist the poor and the less fortunate. Our wallets, billfolds, and bank accounts couldn't open fast enough to provide aid to suffering Haitians. If only this were possible for our own poverty-stricken citizens, many of whom struggle through conditions not that dissimilar to those we now view through heart-wrenching news reports and graphic photographs. After all, it might be you someday who faces the disquieting realization that our health care system is designed for the wealthy, by the wealthy, and in so doing realizes just how much you took it for granted.
Posted by Comrade Kevin at 7:55 AM