Foot-dragging and the Conservative Mindset 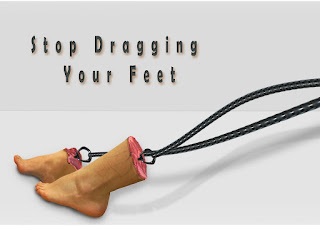 One of the reasons I left my place of birth, among many, is that I could not convince anyone to end Capital Punishment. For them, it was just punishment for the ultimate instance of wrongdoing. They cannot believe any other way is possible. Much like the pacifism I profess, they see it as pie-in-the-sky, not feasible in today's world. We live in a violent culture and must be violent in return.

What we see reflected at us is what some would desperately like to see. And we on the Left have taken stock in fantasies of our own creation. In the height of George Bush's stranglehold on the White House, he was said to have mimicked Adolph Hitler's bluster about Chamberlain's so-called scrap of paper prior to World War II, the theory of appeasement.

As for Medicaid in red states, there are any number of rationalizations used to deny coverage. Single adults are nearly summarily denied coverage. Only those living until the age of 17 are covered, after which they are cruelly trimmed from the roles. Preference is given to those with children, the more the better. There are so many fallacies in these arguments which pass for logic, I'm not sure where to begin.

Medicaid, to some, represents federal government intrusion into state's rights, an argument as old as the Republic itself. It is present when we discussed flying of the Confederate battle flag on a state capital, our latest talking point. But as Herbert Hoover tried valiantly to advance and failed, houses of worship, charities, and civic organizations cannot feed the poor, house them, and attend to their medical needs. Jesus may have advocated for such things in this own way, in his own time, but he lived 2,000 years ago.

It is short-sighted to believe otherwise. Even liberals have their criticisms of government, this one included, but the inertia that works, with time, is better than the condescension that never professes to try. It is, of course, told to us that the poor will always be with us. And by this, Jesus speaks in both the real and the abstract. We can speak of those with need and the means to help them. Both must addressed as each is equally important.

But I return to Planned Parenthood, or the real issue, an anti-choice stance. We may never eliminate the charges of baby killing or infanticide. Though I wish it was as effective as it is in theory, we as Quakers have sought to eliminate majority rules in favor of the consensus model. I make a proposal to you now.

Quaker-based consensus is effective because it puts in place a simple, time-tested structure that moves a group towards unity. The Quaker model has been employed in a variety of secular settings.

The process allows hearing individual voices while providing a mechanism for dealing with disagreements.

The following aspects of the Quaker model can be effectively applied in any consensus decision-making process, and is an adaptation prepared by Earlham College, a Quaker college in Richmond, Indiana:

Multiple concerns and information are shared until the sense of the group is clear.

Norms limit number of times one asks to speak to ensure that each speaker is fully heard.

Ideas and solutions belong to the group; no names are recorded.

Ideally, differences are resolved by discussion. The facilitator ("clerk" or "convenor" in the Quaker model) identifies areas of agreement and names disagreements to push discussion deeper.

The facilitator articulates the sense of the discussion, asks if there are other concerns, and proposes a "minute" of the decision.

The facilitator can discern if one who is not uniting with the decision is acting without concern for the group or in selfish interest.

Ideally, all dissenters' perspectives are synthesized into the final outcome for a whole that is greater than the sum of its parts.

Should some dissenter's perspective not harmonize with the others, that dissenter may "stand aside" to allow the group to proceed, or may opt to "block". "Standing aside" implies a certain form of silent consent. Some groups allow "blocking" by even a single individual to halt or postpone the entire process.


This is one model, but a more civilized approach, to these eyes. Majority-rules encourages foot-dragging and acrimony. If truly successful resolution of problems is what we seek, our system must be revamped entirely. As it stands now, it is all or nothing, and that has led to a whole lot of nothing.
Posted by Comrade Kevin at 11:37 AM