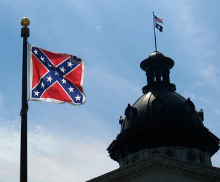 The last state in the Old Confederacy to display the Confederate Battle Flag is South Carolina. As an Alabama native, I recall when our own dubious flag was finally furled for good and removed from the state capital dome. I seem to recall that this occurred in the early 90's, though it could have been in the late 80's. The act was seen as necessary, a sign of continued progress between whites and blacks.

And while I find everything deplorable about slavery, I am a Southerner through and through. Allegiances are strange things. Sherman's destructive march from Atlanta to the sea, the final nail in the coffin that ended the war, was total war before there was a term to coin it. It was war on civilians, though it could be said that it brought the war to a close sooner.

The Civil War destroyed the Southern economy, leaving it poverty-stricken. Arguable, it should have been based more on factories from the beginning, rather than its reliance upon agrarian plantations and an aristocratic planter elite mentality. Railroads were destroyed by invading Yankee armies, warehouses set ablaze, crops seized from the field. Following the war, the states of the former Confederacy were treated like a conquered land by its former adversaries.

It was the synopsis of the noted historian C. Vann Woodward that the South has a unique place in history, as literally having to live as defeated nation. He added further that the United States of America had much to learn from that example. I still believe the ripple effects from that old conflict are in place. And while it is true that Confederate Battle Flags were raised anew to protest integration a hundred years after the conflict, the roots go deeper than that.

Southerners are a proud people who refused to submit to the whims of the conqueror. One sees evidence of this across the globe in every civil war, from Africa to Asia. When we speak about the racism of the Confederate flag, we are not talking rot. Racism has a huge part and to not admit it would be sinful. But there is a kind of defiance present among Southern whites, a refusal to go gently into that good night.

William Faulker, Mississippi native and novelist, said it best and it has been quoted the most.

For every Southern boy fourteen years old, not once but whenever he wants it, there is the instant when it’s still not yet two o’clock on that July afternoon in 1863, the brigades are in position behind the rail fence, the guns are laid and ready in the woods and the furled flags are already loosened to break out and Pickett himself with his long oiled ringlets and his hat in one hand probably and his sword in the other looking up the hill waiting for Longstreet to give the word and it’s all in the balance, it hasn’t happened yet, it hasn’t even begun yet, it not only hasn’t begun yet but there is still time for it not to begin against that position and those circumstances which made more men than Garnett and Kemper and Armistead and Wilcox look grave yet it’s going to begin, we all know that, we have come too far with too much at stake and that moment doesn’t need even a fourteen-year-old boy to think This time. Maybe this time with all this much to lose than all this much to gain: Pennsylvania, Maryland, the world, the golden dome of Washington itself to crown with desperate and unbelievable victory the desperate gamble, the cast made two years ago.


Despite the evils of the bondsman's two hundred and fifty years of unrequited toil, as Lincoln noted in his Second Inaugural, what we see here is a degree of valor and pride from white southerners. It may have always been an unrealistic, romanticized degree of valor and pride we view here, but even today one sees it. It exists, still. Even I once played as a boy with Rebel and Yankee soldier toys, though slaves and plantations were somehow never sold separately (or at all).

Some issues strike you so deep in the heart that they defy strict logic. I will tell you that I find it impossible to express anything other than contempt for the Northern soldier. His bravery and valor were likely the very same as those who opposed them in the field of battle. I care little for his political convictions or his sentiments, but he killed my ancestors, destroyed what economic base the South had by the end of the war, and was not above vandalizing and looting to accomplish his purpose, though I suppose the same is true for both sides and in all wars, which is why I oppose them with such great fervor.

Every Civil War has its trajectory, its epicenter, regardless of where it was fought. We could, for example, be talking about Iraq or Vietnam in this context. And yet they also have their commonalities, too, their bloodshed, and their million cruelties. Those wounds do not close quickly. Indeed, it has been a century and a half after the end of hostilities, and the wounds I and others display have yet to scab over and heal.

General Thomas J. "Stonewall" Jackson was one of the South's finest commanders. Despite his numerous personal eccentricities and a religious streak strong enough that some of his own troops thought him Messianic, he had an uncanny sense of always putting his troops in the most advantageous position, and resorting to daring when needed. A battle had raged. The Union had taken over the Virginia town of Fredericksburg, then vacated it after a humiliating defeat.

Stonewall Jackson was outraged. His entire body shook in anger as he looked around him at what had been done to the city itself. He saw the pianos and the works of art and the crystal chandeliers smashed and ruined on the streets. He saw elegant furniture that had been wantonly vandalized and the remains of elegant, leather-bound books that had been burned for kindling. But it was the churches – the churches – that infuriated him most. Houses of God were pocked with bullet holes and charred by cannon shot. This was a crime against God – a despicable blasphemy – and it very nearly made him weep.

Dr. McGuire, who was seldom far from Jackson’s side, shook his head in revulsion. “What can we do about this kind of barbaric behavior?”

Atrocities are commonplace during times of war. And no side ever has the moral high ground. The most severe blight on the Confederacy might be the Andersonville prisoner of war camp, where men were starved to death, reduced to skin and bones. But we can go tit for tat here if we wish and still be no further along. The brave men who died, were wounded, and lost limbs in combat should be our primary focus.

I can understand South Carolina's stance. South Carolina has always been a firebrand of revolution. They tried to defy President Andrew Jackson in 1832-33 as a pretext for secession, then were the first state to secede from the Union in 1860. It fought the first battle of The Civil War at Fort Sumpter, a Southern victory. Now it is the latest to defiantly and bitterly cling to a lost cause.

That said, I understand the seductive power of lost causes, even in unexpected places. They are beholden to denial and defiance. And they change with time. What strikes me as especially strange happened during a trip to Bethlehem, Pennsylvania, some years back. A person displayed a Confederate Battle Flag from his residence. I was incredulous. "This state didn't even secede! It was a proud free state!"

So clearly the Confederate Battle Flag means more than old fashioned racism. It may be more in line with Tea Partiers, John Birch Society members, and others on the far-right. And it is from this lens that we may truly view the flag, this piece of cloth that means much to many. I do not pretend to think that Southern pride comes with the Stars and Bars attached, but I do know that it has been adopted, or perhaps even co-opted by others who do not live in the Deep South, who have never even set foot in Dixie.

Can we be satisfied among us to acknowledge the tragedy of 1861-1865? Would it do us good to think of boys who never had a chance to become men? Can we take into account the slaves on plantations who died in the fields of overwork or ran away to seek their freedom, only to lose their lives in the process? In the midst of a grand tragedy with no clear winner or loser, only losers, one might argue that we've missed the point. The Civil War was not America at its best, contrary to some. Instead, it was America at its worst. The Confederate Flag is no symbol of pride. It is a symbol, like all flags, of irony and pain.


"The Night They Drove Old Dixie Down"
The Band

We were hungry, just barely alive
By May the 10th, Richmond had fell
It's a time I remember, oh so well
The night they drove old Dixie down
And the bells were ringing

The night they drove old Dixie down
And the people were singing
They went, "Na, na, la, na, na, la"

Back with my wife in Tennessee
When one day she called to me
"Virgil, quick, come see,
There goes Robert E. Lee!"

Now, I don't mind chopping wood
And I don't care if the money's no good
You take what you need
And you leave the rest

Like my father before me, I will work the land,
Like my brother above me, who took a rebel stand.
He was just eighteen, proud and brave, but a Yankee laid him in his grave,
I swear by the mud below my feet,
You can't raise a Caine back up when he's in defeat
Posted by Comrade Kevin at 7:17 AM

On Free Bitcoin you can get free satoshis. 8 to 22 satoshis every 5 mins.