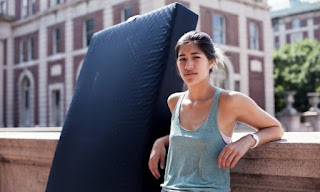 My father believes that we no longer live in a man's world. In his eyes, a politically correct worldview in which women dominate and are always given the benefit of the doubt has taken control. One of the currently sexy terms in the feminism of my generation is impressing upon men that it is their responsibility not to rape, not a woman's need to protect herself. In the 1990's, the focus was on sexual harassment, especially in the workplace. It began in haste with the Anita Hill/Clarence Thomas hearings.

This is my major problem with the justice system. Placing women in the victim role for any reason makes an assumption that they are weak, must be protected from themselves, and often have no autonomy of their own. And the issue with the victim role is that other people, often men, who dominate the fields, get to make judgment calls like these on a regular basis. Laws and statutes are drawn up this way, and many of them were designed by the system to protect women. But even with good intentions, the results are not always foolproof because they were mostly drafted and passed into law by men.

I don't see Columbia University student Emma Sulkowicz, she who carried the bed upon which she was raped, as a victim. Victim is an odd word in our vocabulary. It can mean so many different things. You could say that someone targeted for being LGBT was a victim, and we bow our head in sadness for yet another sad example of homophobic behavior. But if you've ever been forced to report and prosecute a charge yourself, victim takes a very different meaning. You don't necessarily get the ability to define what you mean by victim. Police officers and legal experts make that call.

And while they may be a necessary aspect of the criminal justice system as currently designed, calling a woman a victim in that context is not particularly empowering. It might win sympathy from a jury, a police officer, or a witness, but being a victim comes on their terms, not the person who committed the offense. Victimhood sometimes means sit down and shut up.

I have never experienced, save one incident, a severely traumatic offense. But that was in my childhood. In my adulthood, I had to take an ex-girlfriend to court to obtain an order of protection, to prosecute harassment communications of frequent angry phone calls, and to let her know that hacking into my e-mail account was never acceptable conduct. It took an entire day to fill out all the forms, pay all the fines, and speak to the responsible parties.

If I had no court system on my behalf, I would have much preferred speaking to her face to face. I remember that I was called first. As I stood at the podium, my hands shaking with fear, I could barely get the words out. I'd even taken a tranquilizer to see if it would cut down on my anxiety. And even then, the judge did not rule in my favor. Even with the bitterness, even with the annoyance, even with a bit of fear, I wonder if Emma Sulkowicz would feel justified in speaking directly to her attacker. The criminal charges against him have been dropped, but a Title IX charge is in the works.

Not to sound pessimistic, because I want the result of this action to turn out for Ms. Sulkowicz, I have been in enough courtrooms over the years and observed enough proceedings to have my eyes opened. If I am wrong in saying this, I will be gladly wrong, but I am afraid that this action will not turn out favorably. When I was considering suing my employer, I was going up against an extremely wealthy, old money enclave of my hometown. The lawyer I consulted told me that I didn't really have a case, but I bluffed to the police officer assigned to my case that I was intending to sue anyway. He then tried to have me arrested on four separate occasions.

This is to say that the criminal justice system is mean, tough, and rarely fair. To let them know that they meant business, two plain-clothed cops met me at my doctor's office. They were trying to intimidate me but I shook their hands in passing just as firmly as they did mine. My ex-girlfriend was close personal friends with a lawyer routinely interviewed on CNN, meaning I didn't stand a chance without any representation of my own. So I swallowed my pride and realized that sometimes you just can't fight City Hall.

I'm not saying this to discourage Emma Sulkozicz and those who will continue to be wronged and file charges. What I am saying is that our judicial system is fatally flawed. It's not fair for women in some ways and it's not fair for men in some ways. A woman who is physically abused by a man will be believed more than a man who is physically abused by a woman. In my case, a woman who left harassing phone calls and then hacked into my e-mail might have been more easily believed than an account of physical violence.

Major cases like Ms. Sulkozicz are the most difficult of all. The stakes are huge and so are the rewards. Everyone knows it. And because everyone knows it, the stress level of everyone actively participating is incredible. I don't think it's possible to understate the tension that results from the hugest of huge cases. But even if one doesn't turn out as hoped, others may succeed. Taking the long view may be the best approach any of us can take when we're trying to make significant changes, especially to institutes of higher learning like Columbia University that charge $26,000 per semester, assuming if you can even get admitted. That's big bucks.

My experience with the court system was small ball. I was challenging a city where the mean income is $100,000, the wealthiest in the state, and one of the ten wealthiest in the entire country. This is why I got the shakedown from the cops, because every lawyer with two nickels to rub together was chomping at the bit to finally take the city down. Say what you will about honor and justice, but they're only words to me now.

I want Emma Sulkozicz to be persistent, but to understand the odds she faces. Perhaps she does already and if she doesn't, whomever serving as her legal counsel does. And for those of us cheering her on from the gallery, let's be realistic at initial outcomes. Nothing worthwhile ever comes easily or at the first try.
Posted by Comrade Kevin at 11:06 AM