What Makes a Male Feminist? 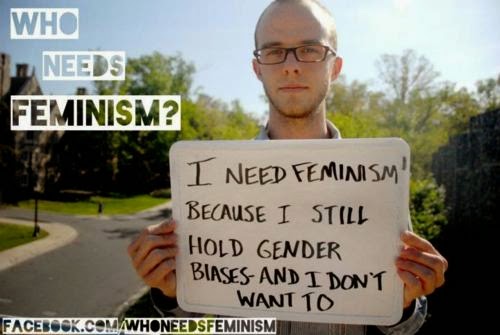 Around a week ago, the writer Alexis Scargill wrote a column entitled “Kindness and Generosity: Insidious Male Entitlement and the Mask of Male Feminism." Scargill's post set its sights squarely on male feminists or male allies, or rather those who proport to be feminist for their own selfish reasons.

This is a particularly sensitive topic for me. It took me years to win trust with particular feminist activists and fellow writers. At first, they assumed the worst about my motives while I only wanted to learn more. I wasn't pandering for sympathy, but that's often how I was perceived with every intellectual breakthrough I made. It would have been nice every now and again to find a man or woman (or even a group of men and women) willing to be mentors to me. That is what is needed to keep men properly up-to-date and hold themselves accountable.

Though this borders on a very different topic, as I've said, I think that male allies and/or male feminists need to band together to refine their views and help each other through what can be an intimidating atmosphere of terminology and hyper-charged political debate. Otherwise, only the most tenacious and motivated men will bother to remain.

My viewpoints in the beginning were those that any novice might make take. One has to know that 2 + 2 = 4 before one can learn how to multiply. I'll concede that I made my mistakes, but from the outset, by some, the bar was placed particularly high for me. Among some, I was expected instantly to be an quasi-expert. A quick study, it didn't take me very long not just to echo the arguments I saw in front of me, but to add my own views in ways that furthered the greater dialogue.

Men who claim to be feminist or male allies for manipulative ends are a minority, but I don't doubt they do exist. Many men who are turned off by the movement believe that it threatens nothing less than castration on their part and a complete loss of power. But to a particular group of supposedly enlightened men, no pose is off limits if it leads to sex. This reminds me of certain men who claim to be gay in order to win trust from women more easily, only to reveal the truth months later.

“I would never date a guy who wasn’t a feminist.” This is something I’ve said in response to a hundred debates in academia, at various jobs, among friends, at family gatherings. It is something I’ve stood by since I was a teenager. But what I really meant was, “I would never date a guy who didn’t self-identify as a feminist.” Because most often, they were not actually feminists in practice, regardless of how they believed to identify and regardless of how enthusiastically they nod in agreement to my feminist declarations.

At 21, I no longer believe a man can take the title of feminist. Feminist ally is the most he could hope to be. Feminist men need to understand first and foremost that the best way to be an ally and support feminism is to support women, not speak for them. Practice good feminism but don’t speak over women. Listen to their experiences and perspectives and learn something every day to be a better ally, because you will never have the lived experience of a woman.


I will never completely understand what it is like to be a woman. I was not socialized as one and though as a male feminist I will constantly seek to understand, I recognize that I will always come up short. I use this as an exercise in humility and seek to listen more than to talk. At the same time, though I have purged most of this away, something most male feminists often find themselves needing to do, there are residual traces remaining of old hurts. My father has always felt threatened by feminism in any form and those political opinions formed me, even though I came to reject them in later life.

Among affluent liberals, who are a minority group in this country, it is much more likely to come across men who assert themselves in this way. Most American men would never take on the identity of feminist in the first place. This was the attitude present for me while I was growing up in the Deep South where rugged masculinity was still the law of the land. But I think this is true for most men, regardless of region.

Within the past two weeks, I have had two more experiences with this betrayal by self-identified male feminists with two men who are close friends to me. To everyone around them, they are feminists, outspoken about their politics, critical of outspoken misogynist men, defensive of women. And that’s what frightens me. They seem cool and trustworthy, but in private, they ultimately weren’t. I don’t want to say these men are horrible people- I really do think they believe in these feminist ideals.

But they don’t practice the same standards they hold men to, and I’m not sure they are even aware of it. If that’s the case- and I hope it is- that self-identified feminist men who fail to respect a woman’s body autonomy by making her feel unsafe or uncomfortable simply don’t realize what they are doing, simply don’t “know better,” they need to know now. They have no more excuses. They need to know better.


And I agree, but I don't think that the behavior of some automatically disqualifies all men from self-identifying as feminist. What the author has experienced is unacceptable behavior, but rather than making a blanket statement that men can't be feminists, I'd rather we continue to work on strategies which insist that men respect boundaries. Scargill backs up from her analysis to state that she doesn't think fake feminist men aren't horrible people, just hypocrites. I understand that she doesn't want to come across too harshly, but if men can't be feminists, how can they hold other men to proper standards of conduct around women?

Male feminist and male ally have been used interchangeably at times. It seems to depend entirely upon the audience. Some think that men can never be feminists. Some think that all men should be feminists. Some define male ally in one way and others define male feminists in a very different one. Some men don't feel they have any right to call themselves a feminist. Some, like me, wear it like a badge of honor. But regardless of definition, we ought to be discussing a code of conduct more than we are defining a litmus test of who's in and who's out.

I respect Scargill's perspective, but I respectfully disagree with her. Being a male ally feels like I'm sitting on the sidelines, consigned to a secondary role. I consider myself a male feminist because I want to be an active participant. My mouth may stay closed longer than it is open, but having processed what I've just experienced, I have the right to open it from time to time and add to the discussion.
Posted by Comrade Kevin at 7:52 AM