and drank rapidly a glass of water 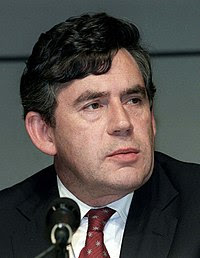 I caught around ten minutes or so of the Labour Party convention that went on earlier this week in Manchester, England.

You don't have to know about British politics to see how far Labour has fallen in the past decade. I didn't see all that many stiff upper lips amongst the throngs. Instead I saw a hangdog look of cynicism and skepticism in the faces of all who attended. Many people didn't even bother to applaud once.

Gordon Brown, Labour's heir apparent, spouted out rhetorical cliche after rhetorical cliche but it was evident to me that he didn't believe a goddamned word of it. Despite urgings to carry on the good fight and the obligatory mention of job creation, Labour is sorely wounded.

And in my estimation, they have only themselves to blame for it. Blair was probably one of the most conservative Labour PMs in the history of the country and he steered Labour well to the right during his tenure. He time in power lead more and more liberal Britons towards the Liberal Democrats and away from Labour.

And yet, for now at least, the party line is to stay the course in Iraq no matter what the cost. Brown's speech included a deliberate mention that "Anti-Americanism" has no place in a global fight against terrorism. I do wonder what his position will be when he finds himself Leader of the Opposition in two years' time.

British politics are in a bit of a doldrums these days. Come the next general election, Britons will have to choose between the lesser of two evils: a Labour party that no one trusts anymore or a re-vamped Tory party that is still seeking to distance itself from Margaret Thatcher.

I can't say I ever really trusted Tony Blair. It's tough for me to trust a man who never seems to cease smiling. But I distrust Gordon Brown more. His arrogance appears to me to be totally self-serving. (and doesn't he look like one of the guys from Monty Python?)
Posted by Comrade Kevin at 2:05 PM