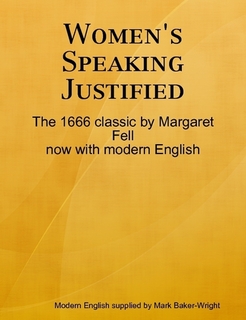 "Thus much may prove that the Church of Christ is a woman, and those that speak against the women's speaking, speak against the Church of Christ, and the Seed of the Woman, which Seed is Christ; that is to say, Those that speak against the Power of the Lord, and the Spirit of the Lord speaking in a Woman, simple by reason of her Sex, or because she is a woman, not regarding the Seed, the Spirit, and Power that speaks in her; such speaks against Christ, and his Church, and are the Seed of the Serpent, wherein lodgeth the enmity"- Margaret Fell
Posted by Comrade Kevin at 7:56 AM