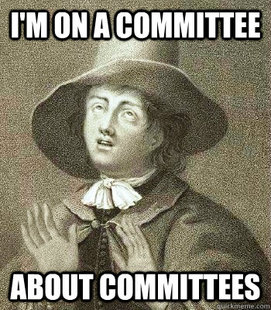 Over the weekend, I was offered the position of clerk for my Monthly Meeting's Ministry and Worship committee. I've already served as a member of this committee for two years. This following year, 2013, will be my last. Term limits are in place to ensure that clerks can only serve for a year and other committee members can only serve for three. They were also enacted as buffer against burnout, as committee service can be draining.

A clerk has been described before as the committee chairman of the board. They have many responsibilities. In my capacity, I will decide which issues should be brought before Ministry and Worship. Monthly Meetings (where one Worships once a week) have designated multiple committees to handle specific needs. This new job will require me to speak with other clerks regularly.

Part of the responsibility is clerical. Clerks arrange an agenda of events to be considered. Most committees meet once a month, to formally decide as a unit which decisions to make. Some concerns are more pertinent than others. Friends always make requests of the Meeting, but some of them do not need to be brought before everyone. Clerks are responsible for reporting the decisions made in committee meeting to Business Meeting, where the Meeting as a whole will have final say.

What makes this decision particularly unusual is my age. At 32, I am now the youngest clerk at my Meeting by far. Clerking is most often the responsibility of seasoned Friends, in Quaker speak. Seasoned Friends are said to be Spiritually gifted and wise. Many people my age would not be considered for such an important position.

When I accepted a spot on Ministry and Worship, the decision was questioned by some at my Meeting. Members of the committee had been, at minimum, well into middle age. I had only arrived on the scene a year or so beforehand. Could a person my age be an effective member? As it turns out, they had no reason to fear. I found my bearings not long afterwards and became a very productive committee member.

Following my lead, two other young adults agreed to participate in committee service. I was pleased to set a precedent, and hope my continued service will encourage other young adults to participate in the leadership structure of the Meeting. Many resist taking part, even though I know they would bring a fresh perspective and energy to an environment that can be very stuffy and resistant to change.

Quakers shy away from honorific titles, but to be clerk of Ministry and Worship holds lots of weight. We are all equal in the eyes of God, yes, but there is always a need for effective leadership. Before formally accepting this position, I have been in communication with as many experienced Friends as I can find. I recognize I will be diving head first into this new position and I want to know precisely what I'm getting myself into.

One of the great ironies is that many people desire power, but with increased influence comes an increased time commitment. I'd never want to be President of the United States or a politician at any level, though I know many people covet any elective office. I'm going to see if clerking agrees with me, then evaluate from there.
Posted by Comrade Kevin at 9:13 AM