A Few Words on Faith and Belief by Elton Trueblood 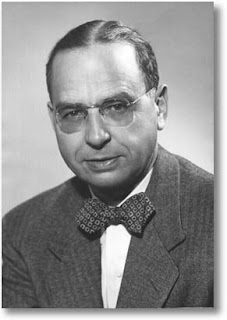 Elton Trueblood was a famous Quaker writer and theologian. Highly influential in his day, his beliefs were impossible to easily categorize. At times, Trueblood appeared to be a contradiction in terms. A Republican in political allegiance, he nevertheless held simultaneous liberal views. A product of an elite Ivy League education, he made a conscious decision to relocate to a small Friends liberal arts college in Richmond, Indiana, wherein he established Earlham School of Religion in 1960.

Before his arrival, Friends churches were hiring pastors either with training from other denominational seminaries or else with nothing more than a college degree with a religion major. Trueblood re-invigorated Earlham.

Late in life, Trueblood moved to Washington, DC, where he married his second wife at the National Cathedral. His first had died a few years earlier of brain cancer. Trueblood eventually left DC for Philadelphia to be closer to his children, a few years before his death in 1994.

A great part of the effort we put forth to prove the existence of God is wasted, and it is wasted because so many people in the world already believe, in some sense, that God is. There are very few real atheists. The vast majority are believers; they admit that our physical world is not self-explanatory--that it requires something behind it and beyond it to make sense of it--that it could not have come into being of itself. Such a belief is very nearly universal.

How are we going to know the character of God? The answer is that we cannot know beyond a doubt, but we do have two wonderful ways. One is the way of experience, and this is open to every man and woman. We come to know him not only in what someone else says, but also by what we learn firsthand. Let us say you do not have this experience, that it still seems beyond you. What then? There is another way.

Individuals become trustworthy because of the quality of their experience and the discipline of their lives. You trust a doctor, not by blind faith, but because he is a disciplined man in a particular field. We have a great succession of men and women in the field of the knowledge of God. These are the ones we have reason to trust, because they are working at the job.

They are often simple in the eyes of the world, but also very deep in experience. Amos, Hosea, Micah, Jeremiah are members of a fellowship of verification. Think of the others who have carried on the procession--Saint Francis, Pascal, John Woolman, and so many, many more.

There is no more rationality in trusting the irreligious in religion than there is in trusting the unscientific in science. As we pay attention to the religious experience of disciplined men, from Abraham to Gandhi, we are conscious of a progressive revelation. The change is not in God--the change is in the ability of men to receive. We become more sensitive to what is to be seen all along. Many things are hidden which later become revealed but which were there all the time. Brahms's great Requiem was just as wonderful before any contemporary student learned to appreciate it.

Insight comes with growth of power to hear and to see. Now, if we take seriously this lesson of trusting those who give us reason to trust them, we come to something very definite about the nature of God. I think it would be helpful if I should put this in five words. These five words make a cumulative series.

The first is that when we speak of God, we mean something real--not just an idea in our minds. There are some people who confuse the idea of God with God. The idea is ours; it changes; it could be wrong; it often is wrong. God is the one who was before we had the idea and without whom the idea would never have been. "We would not be seeking Him," suggested Pascal, "if we had not already found Him." The idea is ours, but God is not ours. He is. Therefore, we must oppose all suggestions that God is just an idea.

After we have said God is real, we must go on to be more specific. We may say, for our second word, that God is concrete, not something abstract. There are many people who suppose that God is merely an abstraction. This has always been a theory, but the great prophets knew better. Goodness is an abstraction. There is no such thing as goodness apart from good people. In science, law is an abstraction. It does not exist except as it is demonstrated.

God, then, is not a principle. God is not only a reality, he is a concrete reality. We know, in ordinary life, two and only two concrete realities. One is the reality of things, like this building. This building is a thing. We do not doubt the existence of things. The other is the finite person--ourselves--others. Faith is the conviction that there is a third concrete reality--God. This gives us two words. God is real. God is concrete. Reality is opposed to fiction; concreteness is opposed to abstraction.

The third word is "transcendent." There is always the temptation to believe that what we mean by God is simply the order of nature around us, or the beauty of the trees, or even the spirit in man. No doubt these are; no doubt they exist; but if this is all that God is, then God will be no more when this world is gone. We can be reasonably sure that this world will someday disappear.

The running down of the universe is a high probability. The day will come when this planet will be cold and dead. If God is merely immanent in the order of nature, then God is temporary. The great conviction of the prophets and of Christ is then exactly contrary to all this. God transcends the world; he made it; his is the creative mind beyond it, without which it would not have been.

This world might be destroyed in our lifetime; it is not unreasonable to envisage destruction of cosmic proportions, but if God is transcendent, he could create another world order. The one conviction which best explains our material world is that it is the result of infinite mind. Matter cannot create, but mind can. We know that mind is the most creative thing in all the world. This building is an illustration.

A number of people sat on a committee for about a year, dreaming of this beautiful building in every detail. It was in mind before it was in fact. Mind does create, and this is true even of poor frail minds like ours. It is reasonable, accordingly, that could be created and re-created by the mind of God. Whatever God is, he is more than we think or can think. He is not to be by measured by our minds.

The fourth word is "personal." The growing conception of all that has been is that God is "personal" in the sense that he knows. If we are thoughtful, we are really forced to this conclusion, because if God does not know, then God is inferior to us. If Charles and Edward know me and God does not know, then God is, in a sense, inferior to Charles and Edward. So we have the great words of the psalmist, "He knows my downsitting and my uprising; he knows my thoughts off."

Then there is the beautiful prayer: "O God to whom all hearts are open, all desires known, and from whom no secrets are hid." In the recent past it has been fashionable to think of God as impersonal, but this has been the result of superficial thinking. We ought to be far enough along to know that personal does not equal the physical. The awareness and understanding is what we affirm we say that God is truly personal. This in itself would be but it is not the end of our series.

The last word is "caring." He is real, concrete, transcendent, personal, and he cares. "Like as a father pitieth his children so the pitieth them that fear him." Jesus said, "Are not two sparrows for a penny? And not one of them will fall to the ground without your Father's will." The almost inconceivably great conviction is this--that at the heart of the world is the real Person who knows of us perfectly and who actually cares for everyone of us.

Does this seem difficult to comprehend or to accept? If so, note that the most caring persons you have ever known are those who have had the capacity to know many persons and care for them individually. God is the infinite Person and therefore can include concern for you.

Each of us has a holy calling, a vocation. This may be the most exciting idea in the human mind. It can make us bear up anything, because, if God really cares, there is nothing that cannot be turned into victory by his grace. This is what I believe, and believe so firmly that I am willing to stake my life upon it. If he has a plan for me, I must try to find it. This makes religion a experience; it makes men shout and sing.

On this basis lives become exciting, full of wonder, full of adventure, because we do not work alone. I do not believe that we work alone. In every life there is a God-shaped void, and this void aches until it is filled.
Posted by Comrade Kevin at 12:30 PM