The Parallel Universes of Politics and Popular Sentiment 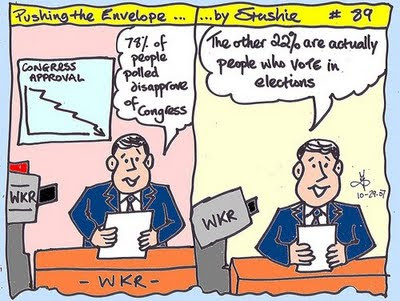 Politics is one part ballet, two parts theatrical performance, with the same players taking different roles as the latest situation requires. It is a shifting sort of organic arrangement, whereby that who is one's ally in the morning can be one's enemy the next. The most successful politicians know this instinctively and recognize that this degree of constant posturing and shape-shifting should be attributed to the profession itself, not to the practitioner. We, however, do not live in such a world of allegiances that shift like tectonic plates. We do not easily recognize that political pronouncements have a shelf life of roughly three hours time, upon which they are superseded by the latest changing of the wind, or, for that matter, changing of the guard.

Still, we try to apply the code of conduct and rules of the game that exist in our world of resolute, lasting convictions to that of the politician. This is what leads us to great frustration. This morning some are criticizing President Obama for not coming down more punitively on Joe Lieberman when he had the chance. A week ago, Republicans were lashing out at Olympia Snowe for her duplicitous perfidy. A week before that, Progressives were purple with rage at Senator Max Baucus. A week from now, a new target will arise, align himself or herself with something we either support or oppose, and the game will begin again. The process reminds one of nothing less than an endless round of musical chairs. Those congressional leaders involved in an active tug of war will always reposition themselves on safer ground as need be, while the ones who stand firm are often likely to find themselves without a seat.

In this eternal game of chess,

O O O O that Shakespeherian Rag -
It's so elegant

I shall rush out as I am, and walk the street
"With my hair down, so. What shall we do to-morrow?

"What shall we ever do?"

Observe the ballet, though the steps may be a bit quicker, the pace may be sterner, and the tempo deliberately accelerated. As regards politics, in which there is always something tangible to gain or to lose, I only believe in the last statement made by whomever utters it. This would be considered exceptionally pessimistic in the real world, but makes complete sense within the realm of political discourse. Lament it if you will, but even a charismatic figure elected to shake up Washington and a largely underwhelming speaker could not betwixt the two of them figure out how to drain the swamp. It takes more than legislation to undo a complex, frequently befuddling system of strange allegiances and stranger bed fellows. The skillful politician is a master of both slight of hand and cerebral dexterity. He or she rarely gets caught in a lie or a half-truth, while the less skilled end up without a chair when the music ends. The results when tabulated might be half chance, like everyone's else's, but they are always composed of calculated risk, with the hope of ultimate profit and gain.

We may have a rough idea of the relative platform our Senator or Congressperson stands upon, but beyond that, one needs an actuarial table to correctly calculate where he or she might go from one moment to the next. Risk assessment doesn't just stop with insurance and rare is the incumbent who can count on an easy re-election campaign, year in and year out. If we were all more or less the same in allegiance and conviction, then politicians could be reliably counted on to talk out of only one side of their mouth. Until then, we are stuck with the system we have, which satisfies few and enrages many.

To better explain my case, I sought to divine what was the historically highest possible Congressional approval rating ever recorded. While I certainly was inundated with sources which told me what the lowest approval rating for the both chambers had been at many points in time, attaining its compliment, however, provided elusive. In the data I did find, Congress never polled above 45%, which means that if it as a collective body ran for office, it would never win and probably never even trigger a runoff. This fact also underscores what a convenient target the legislative branch is for many of us, but also proves that its overall popularity is pointedly meaningless unless it drops to single, or near single digit lows. By contrast, even the least popular Presidents in modern memory still managed to poll slightly above 20% in their lowest periods and some scored nearly 80% in their times of highest popular favor. As Americans, we favor personalities over collective bodies, perhaps because we can relate more to a individual rather than a frequently flummoxing deliberative entity whose ways are misunderstood even by the highly educated.

Returning to the matter of effective analysis, the most skillful strategies for determining future courses of action might be found within the brains of those who think three and four moves ahead while recognizing that events are always subject to change. This is not to imply that some method to the madness exists, either. Best intentions are often preempted by breaking news and any schedule ought to be penciled in, rather than chiseled into granite. Those public servants who are caught flat-footed or utterly unawares are always the easiest targets for ire and criticism. They also tend to not survive. That who we have in our cross-hairs today will often be our firmest unforeseen ally with time. As for the present moment, which is all we are ever granted in politics, the once and future Health Care Reform proponent assumes a temporary position in our affections and our current antagonist draws boos and jeers. The Public Option is dead, long live the Public Option. This is, of course, until the funeral is called off and the coronation resumes, once more.
Posted by Comrade Kevin at 6:17 AM