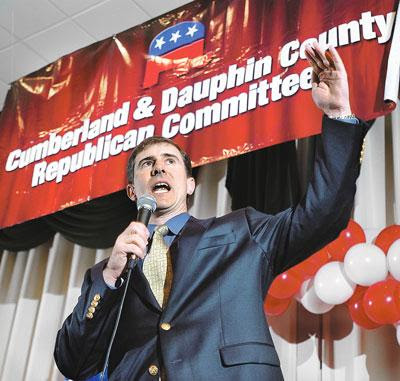 As I have been unemployed, or at least severely underemployed for the past several months, I decided yesterday to make another attempt at making some income. A job poster advertised the need for rudimentary data entry, an activity that, with time, usually turns one's brain to gelatin, but at least it pays. After being ushered in to a well-furnished and crisply professional business waiting room, I was taken to a much less well-furnished interior comprised of the maze of the stereotypical generic office. With a bland name like CMDI, I didn't have the foggiest notion of what sort of work was needed or even what the nature of it would be. The matter-of-fact, perfunctory demeanor and expensive clothes of the receptionist provide no indication of what one ought to expect when one's name is called.

When I noticed a McCain/Palin poster adorning the walls of a cubicle, I at first thought nothing of it. I reflected that every workplace had at least some proud Republicans in it. It wasn't until later that I realized that as contentious an issue as politics is, particularly at work, the fact that a poster like that was so prominently and unashamedly displayed ought to have been my cue. As I walked into a back room full of fifty computers and people typing madly away, I noticed that ringing the entire space were cardboard boxes holding forms. Upon these boxes the names of most every major Republican challenger for the 2008 nomination were listed, as were PACs set up to aid each contender's efforts, as were general Republican party causes. It was at this point that I realized that working here would require some ethical calisthenics, the likes of which I wondered I could ever muster. Still, even if I am even offered a job and opt to decline, there will be someone else with these very same reservations who will have no choice but to accept the devil's nickel and work for chump change.

The company in question takes great pains to call itself something utterly innocuous and seemingly unrelated to politics altogether, but, as an employee informed me, all of its clients are Republican. Yet, the company implies on its website that it handles more than merely political clients, which is something that I never discerned from my own observation and in asking questions of employees. It left me wondering if the Democratic party resorts to similar tactics when it comes to the businesses of inputting fund-raising data from individual donors and keying in the results of internalized surveys---surveys that attempt to gauge the political sentiments of those who give money to the party. It was, however, at least interesting to contemplate how the RNC sets policy priority and how it categorizes those who keep it in business. I also wonder about the legality of the practice, since if there was nothing objectionable about its cozy relationship with the party in the first place, why would it feel a need for a cover?

Since I was one of a vast number of desperate job seekers that day, I had ample time to consult the company's health insurance policy. Though benefits would never have been offered to a part-time employee like me or any of other presumptive candidates, one could not help but see how full-time employees were provided probably the most unfair and restrictive group policy I have ever seen. Heavily capped dollar amounts made it easy for even healthy people to quickly supersede their coverage limits and end up paying an obscene amount out of pocket. Anyone with a chronic ailment would quickly hit the coverage ceiling and be forced to pay 50% of visits to a specialist, which would quickly add up with the passage of time. This was in addition to a prohibitively high deductible, to add insult to injury. I suppose I shouldn't be surprised that a Republican company would offer a plan like this.

I feel sorry for the worker bees, clicking and clacking away in a dark room with no windows, inputting the information of yet another stranger. Having lined it up everything neatly, this internalized data will be then synchronized, analyzed, and showcased in software packages with cute names or short, memorable acronyms. Even with the latest impressive-sounding and professional-looking presentation, aside from reducing clutter, I really wonder how this helps anyone. Any business will proclaim the indispensability of its products, of course, but beyond the cheerful hyperbole, whose agenda does this support? Clearly this must justify someone's existence. Aside from having a better understanding of the nature of political contributions and some kind of hierarchical system that ranks from highest to lowest the most pertinent concerns among the rank and file, I have to say I'm not convinced of the logic of the system. I am skeptical of polling data for the same reason. No Child Left Behind is evidence that numerical data can be manipulated to say anything anyone wants it to say and that statistics can be easily cherry picked to set out a self-serving agenda that strongly deviates from the truth.
Posted by Comrade Kevin at 7:56 AM

You're such a great writer! I love reading your stuff. You might enjoy reading "Political Animal" a novel by David Mizner that gave me an excuse to laugh over our often sorry excuse for politics in this country. Yeah, as all these debates have been going on regarding insurance I've been thinking two things. 1. When we have national health insurance, people will stop working the stupid jobs such as the one you narrowly avoided there and 2. We need to reform education! People are such suckers! They can't tell propaganda from fact! Can't have a democracy without an educated populace.

Good luck on your employment search. I was underemployed for years and years, which happens to musicians and writers, but somehow I survived and eventually wound up living a remarkably idyllic life, and doing things I never expected and really love. And in retrospect, even being broke, I had a great time. It will all work out. I don't think there's tons of money to be made for most people, but when you're smart enough to organize your thoughts and write them down as you do, you are in probably the top one percent of thinkers in the world, and smart people find a way, even if it winds up being in the Peace Corps in Costa Rica or something. Have fun. Thanks for writing.

Thank you, Jenny. I sincerely appreciate it!