The Parable of Speaking Truth to Power 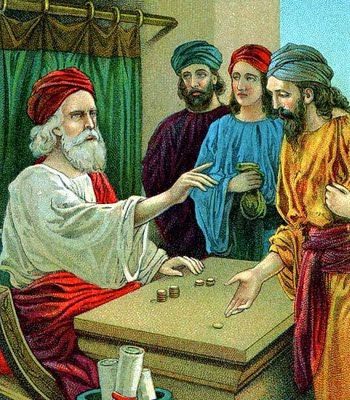 The Parables of Jesus were spoken in symbolic language which lends them to a variety of different, though often interrelated interpretations. Indeed, the very structure of the words which form them make any one sole meaning impossible. It is this fact in particular that has made me skeptical of any church or any faith which stakes a claim to the "real" way. Biblical scholarship has revealed nuance and even irony in the original text itself, both of which must be taken into account before forming any one-sided reading. Jesus often spoke indirectly to avoid persecution by both Roman and Jewish authorities, but beyond the obvious, I have always seen the Parables much as I would an excellent work of poetry, one which provides a new, helpful, before unseen resonance with every subsequent reading. The intrinsic thread remains constant, but new permutations arise as I age and depending on what frame of mind I am in at that particular juncture in my life, I always glean something brand new.

When we talk about our own complicity in a system where those at the top dictate the course of action for those subservient to them, I return to the Parable of the Talents. In this day and age where we often believe that our own power, income, and sphere of influence owes its existence to making compromises with unethical major players, this Parable address our messy moral dilemmas. Here, the version in the Gospel of Matthew, which is cited most frequently.

14 "Again, it will be like a man going on a journey, who called his servants and entrusted his property to them. 15 To one he gave five talents[a] of money, to another two talents, and to another one talent, each according to his ability. Then he went on his journey. 16 The man who had received the five talents went at once and put his money to work and gained five more. 17 So also, the one with the two talents gained two more. 18 But the man who had received the one talent went off, dug a hole in the ground and hid his master's money.

19 "After a long time the master of those servants returned and settled accounts with them. 20 The man who had received the five talents brought the other five. 'Master,' he said, 'you entrusted me with five talents. See, I have gained five more.'

21 "His master replied, 'Well done, good and faithful servant! You have been faithful with a few things; I will put you in charge of many things. Come and share your master's happiness!'

22 "The man with the two talents also came. 'Master,' he said, 'you entrusted me with two talents; see, I have gained two more.'

23 "His master replied, 'Well done, good and faithful servant! You have been faithful with a few things; I will put you in charge of many things. Come and share your master's happiness!'

26 "His master replied, 'You wicked, lazy servant! So you knew that I harvest where I have not sown and gather where I have not scattered seed? 27 Well then, you should have put my money on deposit with the bankers, so that when I returned I would have received it back with interest.

28" 'Take the talent from him and give it to the one who has the ten talents. 29 For everyone who has will be given more, and he will have an abundance. Whoever does not have, even what he has will be taken from him. 30 And throw that worthless servant outside, into the darkness, where there will be weeping and gnashing of teeth.'

A common interpretation of this parable, indeed the one in which I was schooled, states that dispersing moral lessons of fairness, justice, ethics, humility, and compassion requires one to push past fear and be courageous in spreading the positive message of unity and love. Though our "talents" might be unequal to others, we can still make the most of what we have in working collectively towards good. Though each of us have different degrees of skills and spiritual gifts, what matters more is how we use them, not how many of them we possess. I find it interesting that while few of us, especially religious liberals or secular humanists would call religion an activist movement, we use this same line of logic and ancient tactics in encouraging those of like mind to action and also in spurring ourselves to spread the good news to whichever Gospel of Social Justice we find most to our liking. In this particular reading, perhaps unsurprisingly, our sympathies are extended to the Master, not to the last of the servants, who we assume is too scared of failure and too cowardly to have invested his master's money. However, this does present something of a problem when one recognizes the depth and breadth of the master's response, which if we are to take the third servant at his word, is cold and cruel.

Luke includes a similar parable, albeit one where every servant is entrusted with the same amount of money. In his version, we also know up front that the master is deeply unpopular with some of his some of his citizens and that he is willing to put to death those citizens who oppose him. Our sympathies, then, are not with the unforgiving master but with the one servant who was unwilling to invest the money entrusted to him. If the master's business ventures were corrupt, illegal, or unfair then it is only the third servant, entrusted with the least amount (according to Matthew's account) who acted correctly and whose conduct is beyond reproach.

William R. Herzog II in Parables as Subversive Speech: Jesus as the Pedagogue of the Oppressed gives an interpretation that shows the risk of challenging the established authorities.

The servant's frank remark shows him to be a "whistle-blower". He calls the aristocrat harsh and merciless, which are not God-like qualities. He exposes the sham of what has occurred: the other servants have allowed themselves to be used for exploitative purposes, for which they will be rewarded by the wicked aristocrat.

According to Herzog's reading, the point of the parable is to show how much it can cost for an underling to expose the truth about injustice in society. Indeed, this parable is the last Jesus delivers before his crucifixion, the ultimate consequence of his own speaking of truth to worldly power.

Without asking Jesus directly as to what he meant, the true meaning of the parable is up for some debate and indeed Biblical scholars have puzzled over it for centuries and may puzzle over it for centuries more. If we view the parable through Herzog's lens, we recognize that while the master acknowledges that his business ventures may be dirty and unfair, he still insists that some money could have been made if the servant had bothered to invest it in a bank. A more conventional interpretation, outside of a religious context, might read that even in a flawed system, one should at least attempt to make some profit if one feels disinclined to resort to unethical standards. By the end, the master vindictively punishes the third servant by giving all of his money to the most profitable servant, the one who he trusted the most in the beginning. This is a curious way of teaching a lesson and, not only that, quite extreme, almost sadistic in its application. Still, in keeping with the whistle-blower view, such things frequently happen to those who do question the system, threaten established power brokers, and end up being excommunicated from society or even threatened with death in the process.

Since this was the last parable told before the Crucifixion, the ultimate placement of this allegorical story might have been designed to instruct all believers to keep the teachings of the Master (Jesus) and spread them throughout the world and/or to serve as a lesson that all who challenge the system will run the risk of being persecuted. Refusing to engage in worldly sins while simultaneously turning the mirror to reflect the hypocrisies of the powerful is as needed as adherence to a code of ethics, though this degree of sacrifice does frequently create confrontation and conflict. Either interpretation one cites is worthy of contemplation in this age where we understand, now more than ever, the importance of organization and the great need for a common voice to institute reform measures. We note soberly that a great risk still exists for those whose weapon of choice is the unvarnished truth and whose target are those who swear by lies and rationalizations instead. It is written that the truth will set us free, but though it is the path to liberation, truth often comes with consequences, deserved or not.
Posted by Comrade Kevin at 6:53 AM