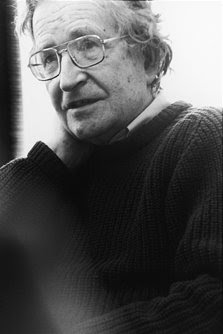 Remember that the media have two basic functions. One is to indoctrinate the elites, to make sure they have the right ideas and know how to serve power. In fact, typically the elites are the most indoctrinated segment of a society, because they are the ones who are exposed to the most propaganda and actually take part in the decision-making process. For them you have the New York Times, and the Washington Post, and the Wall Street Journal, and so on. But there’s also a mass media, whose main function is just to get rid of the rest of the population -- to marginalize and eliminate them, so they don’t interfere with decision-making. And the press that’s designed for that purpose isn’t the New York Times and the Washington Post, it’s sitcoms on television, and the National Enquirer, and sex and violence, and babies with three heads, and football, all that kind of stuff.- Noam Chomsky
Posted by Comrade Kevin at 7:23 AM

I was first introduced to Noam Chomsky as an undergrad in a linguistics class. Transformational grammar is brilliant. Years later, I discovered is brilliant about a lot of things.

I agree PE. I have never read anything he has said that didn't make absolute sense...to me, at least.

If there is such a thing as truism, this man knows them.

I vote for Noam!!

That was a gratuitous and mean-spirited comment. Rather than lash out at one of my friends, would you consider gently correcting her, instead? I have no doubt that you are well-versed on the subject matter.

...not to mention arrogant.

"You obviously don't know shit about linguistics, let alone language."
And you sir know nothing of common decency.

"...it’s sitcoms on television, and the National Enquirer, and sex and violence, and babies with three heads, and football, all that kind of stuff."

Hey Noam, you left Budweiser of the list. Love ya man.

Thank you, Comrade. I will admit that I'm no linguist, but after diagraming sentences for a life time one way, it was cool to diagram them differently. Made me look at things in a whole new light. I call that brilliant.

You're a good friend and you're totally worth it. :)

I have that quotation on the wall at my desk at work!