The Tyranny of Structurlessness, An Excerpt 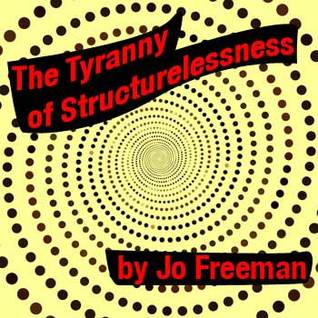 This work was originally published by the second-wave, radical feminist Jo Freeman in the early 1970's. Though it address the subject through a feminist lens, it does show what happens when anarchy is embraced through movements and even small gatherings.

The full article is here, but I'll pick and choose some segments that may prove to be food for thought. You may be surprised if you find elements of yourself in this essay. I recognized many such traits in myself, and the effect was not always comforting. Still, we need to be aware of the patterns and fallacies we can fall into, in spite of our own best intentions. There is far too much here for one sitting, but perhaps these segments will be instructive for you.


Correctly, an elite refers to a small group of people who have power over a larger group of which they are part, usually without direct responsibility to that larger group, and often without their knowledge or consent. A person becomes an elitist by being part of, or advocating the rule by, such a small group, whether or not that individual is well known or not known at all.

Elites are not conspiracies. Very seldom does a small group of people get together and deliberately try to take over a larger group for its own ends. Elites are nothing more, and nothing less, than groups of friends who also happen to participate in the same political activities. They would probably maintain their friendship whether or not they were involved in political activities; they would probably be involved in political activities whether or not they maintained their friendships. It is the coincidence of these two phenomena which creates elites in any group and makes them so difficult to break.


This is one main source of the ire that is often felt toward the women who are labeled "stars." Because they were not selected by the women in the movement to represent the movement's views, they are resented when the press presumes that they speak for the movement. But as long as the movement does not select its own spokeswomen, such women will be placed in that role by the press and the public, regardless of their own desires.

This has several negative consequences for both the movement and the women labeled "stars." First, because the movement didn't put them in the role of spokesperson, the movement cannot remove them. The press put them there and only the press can choose not to listen. The press will continue to look to "stars" as spokeswomen as long as it has no official alternatives to go to for authoritative statements from the movement. The movement has no control in the selection of its representatives to the public as long as it believes that it should have no representatives at all. Second, women put in this position often find themselves viciously attacked by their sisters. This achieves nothing for the movement and is painfully destructive to the individuals involved.

While engaging in this trial-and-error process, there are some principles we can keep in mind that are essential to democratic structuring and are also politically effective:

1)  Delegation of specific authority to specific individuals for specific tasks by democratic procedures. Letting people assume jobs or tasks only by default means they are not dependably done. If people are selected to do a task, preferably after expressing an interest or willingness to do it, they have made a commitment which cannot so easily be ignored.

2)  Requiring all those to whom authority has been delegated to be responsible to those who selected them. This is how the group has control over people in positions of authority. Individuals may exercise power, but it is the group that has ultimate say over how the power is exercised.

3)  Distribution of authority among as many people as is reasonably possible. This prevents monopoly of power and requires those in positions of authority to consult with many others in the process of exercising it. It also gives many people the opportunity to have responsibility for specific tasks and thereby to learn different skills.

4)  Rotation of tasks among individuals. Responsibilities which are held too long by one person, formally or informally, come to be seen as that person's "property" and are not easily relinquished or controlled by the group. Conversely, if tasks are rotated too frequently the individual does not have time to learn her job well and acquire the sense of satisfaction of doing a good job.