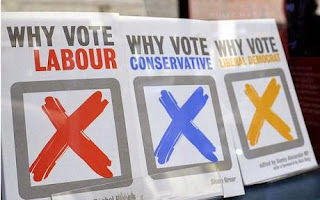 Yesterday's election in the UK was a shocker. A race that almost everyone expected to be nail-bitingly close was anything but. Exit polling by the BBC released shortly after the voting ceased proved to be extremely accurate. Prime Minister David Cameron's Conservative Party won another five years in office and a clear majority of seats in the House of Commons. It was also a stellar night for the Scottish Independent Party (SNP), making one wonder what concessions Scotland will demand from the rest of the United Kingdom.

Aside from the politics of the night, I noticed the number of newly elected Members of Parliament who are women. Nor could I help but note the number of candidates for each available seat who were women, even if they didn't win. Perhaps this isn't surprising from a country who elected its first female Prime Minister in 1979, thirty-six years ago. Nearly every race I viewed had at least one, and more often than not, two or more women running for office alongside two or three men. I've never seen that kind of parity present in this country.

By contrast, let's take a look at female representation in the United States. This information comes from a Washington Post article from November of last year.


Tuesday's election will bring the count of women in Congress to more than 100 for the first time, between both the House and the Senate. The number of female U.S. senators will either remain at 20, the same record high as set in the 2012 elections, or could reach 21 if Democrat Mary Landrieu wins the runoff election in Louisiana.

Meanwhile, the number of women in the U.S. House of Representatives now stands at 81, according to numbers tallied by the Center for American Women and Politics (CAWP) at Rutgers University, which tracks the number of women in elected office. Another four races involving female candidates, according to CAWP, are still too close to call — meaning the final tally could end up as high as 85 women in the House, compared with 79 in the 113th Congress.

And yet, despite this milestone, the presence of women in Congress still doesn't appear poised to grow by more than a trickle. Before the election, women held 99 seats in Congress. The post-election total stands at 101, and could at most reach 106.

Returning to the UK, here is their tally. The comparison is stark and difficult to ignore.


The UK has the fifteenth highest proportion of women MPs out of the 28 EU Member States. 41% of UK MEPs elected in 2014 are women, compared to 37% of MEPs across all 28 EU Member States that took part. Internationally, the UK Parliament ranks 56th out of the 190 countries included in the Inter Parliamentary Union’s 1 January 2015 monitoring report.

In addition, voter turnout differs considerably between the two countries. Energized by nationalistic fervor, voting in some Scottish polling places was as high as 80%. This is utterly unheard of in the United States, regardless of what issue or candidate is up for election. Granted, it should be noted that turnout in England this election showed a divided and disillusioned electorate, as many races polled often under 60%.


U.S. turnout in 2012 was 53.6%, based on 129.1 million votes cast for president and an estimated voting-age population of just under 241 million people. Among OECD countries, the highest turnout rates were in Belgium (87.2%), Turkey (86.4%) and Sweden (82.6%). Switzerland consistently has the lowest turnout, with just 40% of the voting-age population casting ballots in the 2011 federal legislative elections, the most recent.

U.S. turnout rates have been fairly consistent over the past several decades, despite some election-to-election variation. Since 1980, voting-age turnout has varied within a 9-percentage-point range – from 48% in 1996, when Bill Clinton was re-elected, to 57% in 2008, when Barack Obama won the White House. (Turnout, of course, varies considerably among different racial, ethnic and age groups.)

The difference, among many, between the UK and the US is that most Britons can be reliably counted on to show up at the polls. Many Americans show their displeasure by simply not bothering to turn out to their designated precinct. This is a precedent I wish we could reverse. I really wish that it doesn't take salacious ballot initiatives or extremely charismatic candidates to draw out even half of the vote, or maybe a little more than that.

Cynicism around American politics is something of a spectator sport and is an extremely popular pastime. I sometimes think the way to get people in the US to vote would be to form a Politically Cynical party and see how many people would get behind it. And though this may be tough medicine, unless people perform their civic duty, they have no right to complain about the mediocrity of their Representatives or Senators. And, similarly, if American voters who claim they support gender equality don't vote for the numerous qualified women on the ballot, they should expect nothing to change there, either.

Many lessons can be learned from yesterday's UK election. A good number of them are only applicable to Britain, but Americans can see at least a dim reflection of themselves. Relying on polling data to dictate the course of a campaign has its limits and it can be very wrong. Ignoring the concerns of a particular region of a country, or even being perceived as such can have disastrous consequences. Wedge issues can be astonishingly effective, especially when they play into mutually paranoid fears. And, to conclude, elections are often determined by people who make up their minds at the last minute.
Posted by Comrade Kevin at 8:54 AM