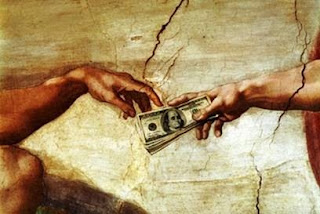 Not given to wine, no striker, not greedy of filthy lucre; but patient, not a brawler, not covetous-1 Timothy 3:3

You only become a Republican when you get money.

My grandmother would say this to anyone within earshot, especially to her two sons, my uncles. Like many rural southerners of her day, she was a New Deal Democrat and worshiped Franklin Roosevelt. Much recent scientific brain research has gone into determining what makes for a conservative and what makes for a liberal. But sometimes the motives aren't nearly that complex and don't need a brain scan. Environment and circumstance can be equally influential and determine voting history better than science.

The Great Depression made lifelong Democrats, certainly, but what is less known is that it also made lifelong Republicans, eventually. My uncles were raised in public housing at the beginning of their lives. This was a source of shame for the family and never to be mentioned under any circumstances. I only learned it myself a year or two ago myself. Slowly, the family business my grandparents cooked up began to break even and then turn a modest profit. The worst was over. Their own familial Great Depression had subsided.

By then, my grandparents had been able to buy a house large enough to accommodate four children. They'd found a steady supply of water wells to drill and sometimes even large and profitable contracts came their way. But while the generation of my grandparents cast straight-ticket ballots for the Democratic Party, the effect of poverty made a very different impact a generation later when the United States regained its own prosperity.

My uncles were war babies. The post-WWII boom had yet to take full flower and for a time the entire family lived in poverty. Poverty has a way of leaving an indelible impact upon those who are unfortunate enough to experience it. Fears of scarcity never subside, nor do those fears that whisper that the poorhouse is only a few bad breaks away. The attitudes of my uncles reminds me of of Scarlett O'Hara in Gone with the Wind.


There is a dark side to this kind of thinking. The family placed a priority upon making money and being financially successful, at any cost. As we know, there are ethical ways of profit and unethical ones. Unethical conduct can be legal, but it certainly isn't moral. If you've read the book yourself, or seen the movie, Scarlett's business practices fell into this category, too.

I'm sad to say that monetary compensation was valued more than what should matter, love. That family did not feel indebted to anything like the Quaker Testimony of Simplicity or Integrity. Instead, the two of them put their mental energies into getting rich, and before long, they succeeded. But at such a cost! We can worship God or money, and they chose the latter.

Now members of the 1%, though it would be years before anyone would use that terminology, they voted for the party they felt would keep them wealthy. It was little more than craven self-interest. I try to feel sorry for them, not in a condescending sort of way, but in a very genuine sense because I know that what they experienced as children was nothing like I have ever gone through in the whole of my own life.

That said, my grandmother lived out the rest of her days from the interest of a trust fund. She continued to vote Democratic. One of my uncles dabbled in local Republican politics but got in trouble due to a conflict of interest, which effectively ended his political career before it started. My other uncle votes GOP regularly but has never shown any interest in throwing his hat into the ring. Now he is simply too old.

I'm less concerned with this essay to talk about political parties, but I am more interested in what motivates people to cast a ballot, regardless of what X they mark and then stick in a box. I began this essay talking about research that appears to indicate that people are predisposed to vote for conservative candidates or liberal ones. But I think the brain is much more malleable an organ than that, and intense personal experience makes a profound difference.

When I think about tolerance and resolving misunderstanding I contemplate my Republican uncles, and what went into forming their political consciousness. I will never think the same way they do, nor will they ever think the way I do. But I do sympathize with the severe financial hardship that led them to make the decisions they did. This quest for legal tender came at the expense of their families and their children, and I am less compassionate for those reasons. But I think in their minds they were fearful of having to start again with nothing, and it drove them onward until they made millions of dollars.
Posted by Comrade Kevin at 7:52 AM