Crimson Tide, Warts and All 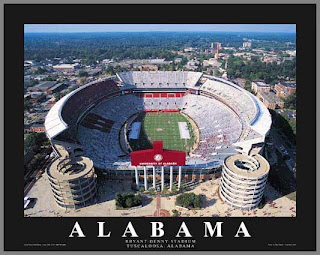 At long last, football season is only a few weeks away. When it begins, I will resume a tradition that stretches back to before I can even remember. Prior to my birth, my father purchased a particular t-shirt at a game. It was just the right size to fit an infant. The shirt read, "Hang on Bear, I'm coming!" I've seen the picture myself, taken on a grainy Polaroid, showing two young parents and child beaming at the camera.

By "Bear", of course one means Paul "Bear" Bryant, the Alabama Crimson Tide's larger-than-life head coach. Sadly, I did not get a chance to play for him, as he died when I was two. But as I grew up over the years and seasons, football games became family events on Saturdays in the fall. Assuming we didn't have tickets to a game, my mother, father, and myself watched them together on television.

My mother's family didn't follow football. Her father, in keeping with the preferences of his generation, was a baseball fan. Though Alabama had a tradition of winning that hearkened back to the Twenties, baseball was the undisputed champion in the minds and hearts of Americans. Football steadily grew in popularity, and by the time I was born, it had dislodged baseball somewhat from the number one position the sport had held throughout most of the 20th Century.

My mother was a hippie, and abstained from sports for that reason. This was until she met her husband, my father, who was a voracious Tide fan. For his sake, she tried her hand at being a supporter, and found she liked it. Within a few seasons, she could talk strategy like a pro and analyze each play.

I was an emotional child, and the outcome of any game sent me spiraling in one of two directions. With a victory, I experienced great joy. With a loss, I burst into tears and could not be consoled. Though I have grown to be an adult, what I feel now following the conclusion of a game is a more restrained version of how I felt back then. Disappointment follows a tough loss, sticks around for a day or two, and then largely fades away. Wins are cherished, to be remembered for years, and immortalized for posterity.

On the days we got up early to make our way to the stadium, going to the games in person challenged me. Even at a very young age, I learned lessons about how to be a better, more tolerant person. Some of them I have taken to heart and others may need additional time to season. Once you start making summary judgments of people, it's a difficult habit to break.

I can be very judgmental, especially when making assumptions about people I deem aren't like me. Alabama, like many states, is divided between the more affluent cities  and the poorer rural areas. Tension between the two has always existed, based mostly on mutual misunderstanding. An Alabama football game is a microcosm of the entire state, if not the entire region. The affluent suburb I called home was safe and homogeneous, and I had never really spent much time around people from small towns.

To city dwellers, country folk are little more than backward rubes and rednecks. To rural residents, city slickers are snobs and holier-than-thou. Both of these are unfair characterizations, certainly, but they are perfect examples of opposing attitudes between social classes. I set high expectations for myself and for other people, and when people can't measure up, I can be dismissive.

My personal challenge to myself is this: if I can't accept people where they are, especially those who grew up in the same small state I did, how can I begin to accept anyone else on the face of the Earth? Forming identity starts early, and what took hold for me in childhood has had a long time to fester and festoon.

People often talk about the obscene amount of over-emphasis placed upon sports, as well as the money that changes hands. The college game is supposedly a contest between unpaid amateurs, but recent developments with last year's Heisman Trophy winner may have revealed otherwise. It will not stop there.

I can't disagree that we as a society pay dearly to be entertained. But I try to keep in mind the mechanic or factory worker who works hard at a monotonous job. He or she (as women are often devoted fans themselves) toils away Monday through Friday, but lives for the games. Alabama may always be a poor state, but its football team wins consistently, providing a sense of pride and accomplishment. If the success of a team improves a person's self-image, far be it for me to discourage it.

In theory, sports is the great leveler, but this is only a superficial characterization. The inhabitants of an entire stadium might momentarily feel closer and less inhibited to each other over the course of three hours, united in more-or-less common sympathy. But take a closer look. Observe where people are sitting and what sort of people are seated there. The seats with the best view of the game cost much more than those in the end zone. For a short time, social class and place of origin might be less important, but the minute the crowd heads for the turnstiles, class distinctions resume.

Several of my friends from where I grew up boycotted sports altogether. In part, they were reacting to how pervasive and all-encompassing the games were in the grand scheme of things. Some protested to the royal treatment players are given, so long as they could perform on game day. Here is one of my favorite sayings of Gertrude Stein. "Money is always there, but the pockets change." With every passing year, it seems like college football grows out of proportion a little more. More pockets and more changing of the pockets.
And even though I cannot fault anyone for opting out, I still have my Saturdays afternoons and evenings in Autumn. I'm in the minority now, having moved miles and miles away, but I periodically encounter other fans in the city on my way to and from somewhere else. We are grateful for the familiar. Even the most satisfied person gets a little homesick now and then. As long as we stick to sports, and not politics, I have the satisfaction of knowing that we're on the same team.
Posted by Comrade Kevin at 8:19 AM