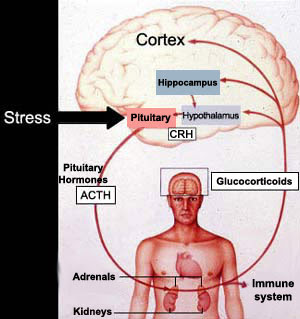 I think it's finally time again to document my health woes. In some ways, they've improved but in some ways, I'm still seeking an adequate overall diagnosis. The most pressing issue is this one. I've been experiencing short, but intense periods of extreme fatigue. About every two weeks, I'll become so tired that even walking short distances is a chore. The worst of it lasts two to three days. But even when conditions improve, I still become tired far too quickly. This is new and very troubling.

When at the gym, an hour and a half workout with weights leaves me feeling wiped out. I stumble up the stairs, having just showered and dressed. I used to be able to snap back easily, and that hasn't been the case for a year or so. Never the most graceful soul on two feet, now that my body and legs are tired, I am even more clumsy than before. This is just one side effect of an excessive level of cortisol. I've also, in the past year, caught a severe cold at least once every two to three months, which would also indicate cortisol irregularity. I have a documented anxiety disorder. Constant stress is just part of my life and this, too, can also cause problems with cortisol.

Tomorrow I begin a cortisol test. Apparently there are very specific instructions to follow, but nonetheless I am still going to have to pee into a jug for a full 24 hours. Attaining an accurate cortisol profile insists that a full days adrenal action be properly documented. Though I rarely make predictions, in all of my research, I think this test is really going to reveal that something's up with cortisol. As for where we go then, I guess I'll have to confront it then.
Posted by Comrade Kevin at 1:10 PM