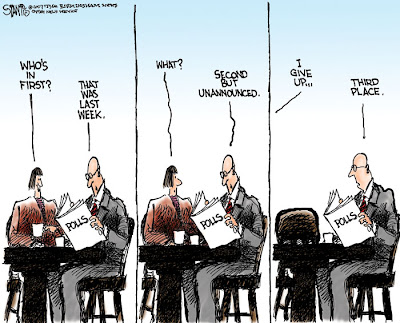 I hope you'll pardon me for stating the obvious. No matter whether you consult the data of a well-respected firm like Gallup or examine any smaller poll whose information collection methods are questionable at best, our President's numbers are steadily dropping. Still, as some media outlets are wisely qualifying, no worthy policy fight has ever come easily, or without shedding some overall popularity in the process. The politically safe route would be to never state a contentious position or to undertake a massive endeavor bound to shed potential voters in the process. One has to give Obama credit where credit is due. He is risking a tremendous amount by pushing health care reform, including his ability to be re-elected as well as his party's firm control over both sides of the legislative branch.

The frustration many of us here in the Democratic wing of the Democratic party feel also needs no poll numbers to confirm. Thus far, President Obama has proven to be far more centrist than some of us (myself included) were hoping. When many of us would have wanted a staunch, unapologetic Dennis Kucinich liberal we received a pragmatist still attempting to at least entertain Republican points of view. Even so, I think there is some degree of bet-hedging and damage control influencing White House strategy these days, particularly when one contemplates the numerous mistakes and strategic blunders that doomed Lyndon Johnson. Johnson's attempt to push both guns and butter eventually forced him to forgo running for his second full term in office and tarnished his legacy among liberals who still appreciate his Civil Rights and Medicare/Medicaid reforms but have never forgiven him for escalating the War in Vietnam.

Wars put every leader in a bind. They are almost uniformly popular in the beginning, boost economic strength by pumping dollars and jobs into manufacturing the tools of the trade, give a short-term booster shot of unity and mutual purpose between people who ordinarily hold major differences with each other in the form of a common enemy, but before long grow unpopular the very instant fighting men and women begin coming home by the scores in body bags. That we as humans want it both ways simultaneously is a matter for some contemplation and if it were up to me, we'd set war behind us as an outdated relic of brutality and unsound practice, along with the Spanish Inquisition and the torture chamber. In my mind, any petard that front-loaded, demoralizing, fickle, and unsustainable in the human psyche would be best never hoist. Even if we win, we lose.

When I examine the wars we have fought in this country, only the triumphs of American Revolution and both World Wars overshadow the tragedies. Nevertheless, by their conclusions, the population was weary, exhausted, impoverished, and eager for them to end. Nowadays, twenty-first century warfare has proven to be nothing like these epic struggles with clearly distinguished enemies and mutually agreed upon rules of engagement. The wars of our age have no easily discernible focal point, have no easily discernible enemy, and have no easily discernible designation of beginning, middle, and end. In this latest Iraq War, for example, people fully expected to read about momentous victories romanticized by the press and utilized by the military as rallying cries. Some seemed to ask, Where is our Iowa Jima or Gettysburg or Yorktown?. There were none and increasingly there will be none. We will not see this in Afghanistan, either. One could easily argue that the possibility that protracted combat is utterly futile in modern times with modern warfare should be a concept any world leader would take care to contemplate for himself or herself before committing troops into harm's way.

Health care reform, however, or for that matter any kind of social compact that facilitates and increases human health rather than destroying it on the battlefield works on the reverse principle. Unpopular and contentious among many in the beginning, the cost benefit and quality of life improvement to be reaped when people live healthy, productive, thriving lives swells and steadily grows with time, and eventually it is observable to everyone. But before we take false hope and assume that our President, provided he signs a suitable bill, will in so doing resuscitate his legacy with all and be vindicated in the process, we also need to be realistic. Often the results of any massive undertaking in social justice are only discernible years after the fact and often purely in hindsight. We all yearn for immediate or at least timely responses to our hard work and in exceptionally complex and frequently confusing undertakings like health care, we mustn't underestimate the length of that often-invoked moral arc that bends towards justice. Indeed, it forces us to live for the future rather than for the present.

President Eisenhower invoked this idea in his Farewell Address. Though the speech is best known for providing first mention of the Military-Industrial Complex, Eisenhower takes into account the biggest picture of them all.

Another factor in maintaining balance involves the element of time. As we peer into society's future, we – you and I, and our government – must avoid the impulse to live only for today, plundering for, for our own ease and convenience, the precious resources of tomorrow. We cannot mortgage the material assets of our grandchildren without asking the loss also of their political and spiritual heritage. We want democracy to survive for all generations to come, not to become the insolvent phantom of tomorrow.

Down the long lane of the history yet to be written America knows that this world of ours, ever growing smaller, must avoid becoming a community of dreadful fear and hate, and be, instead, a proud confederation of mutual trust and respect.

Such a confederation must be one of equals. The weakest must come to the conference table with the same confidence as do we, protected as we are by our moral, economic, and military strength. That table, though scarred by many past frustrations, cannot be abandoned for the certain agony of the battlefield.

Civil Rights, Womens' Rights, and LGBT Rights are a bit different, and more like a cross between war and health care reform. That we fight our battles with words and not with fists or guns I take to be a massive positive sign that we as a human race are making evolutionary progress. Yet, as for these worthy causes, they are tremendously popular with certain segments of the population and with other segments they are horrifically unpopular. Some people embrace change and some dig in their heels and resist. There are no major battles. Instead, there are small skirmishes which eventually add up with time. Quite unlike war as we like to think of it, there is no decisive battle at which one can separate winner from loser. Winning hearts and minds is a case by case matter which evolves with time and at its own pace. We can set things in force and continue to apply pressure, but once begun, we need to understand that no matter what we might desire, we cannot set an effective date of conclusion. As a person of faith, I believe that the decision is entirely God's, but I certainly respect those who believe otherwise. No matter what you believe, it is imperative that we continue to fight, but know that unlike a shooting war, a war for mindsets, opinions, moral imperatives, conflicting priorities, and cultural differences never concludes when the other side surrenders. The war we fight is often the one within ourselves.
Posted by Comrade Kevin at 10:19 AM

I recently came accross your blog and have been reading along. I thought I would leave my first comment. I dont know what to say except that I have enjoyed reading. Nice blog. I will keep visiting this blog very often.

Thanks for your comment. I always welcome new readers and I have several regular readers who have become very close friends over the months and years.