The Testimony of Discomfort 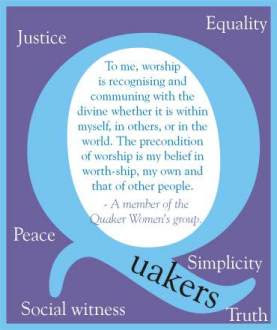 Yesterday, our meeting greeted a group of 40 to 50 high school students. These 9th through 12th graders attend a Quaker school in North Carolina and were here in town as a scheduled stop as part of an extended Civil Rights Tour that, by the time it concludes, will span five southern states. Call it a very lengthy Field Trip if you will. Non-Friends often are unaware that a significant population of Friends live in North Carolina. As a matter of fact, the state trails only Pennsylvania in total Quaker membership in the United States.

After I said my goodbyes to everyone, helped clean up the meeting house, and headed home I found the school's website. Out of curiosity, I looked to see how much a year's worth of tuition cost. It was even higher than I expected. Starting at Kindergarten, tuition per annum begins at a mere $8,500 a child and then by the time high school comes around, it increases prodigiously to $14,000. This strikes me as somehow wrong, particularly when I am reminded of that fact that as Friends we hold true and dear a Testimony of Equality which states that all people are equal in the eyes of God and in the eyes of Friends. Furthermore, we also hold sacrosanct a Testimony of Simplicity that encourages us to live a simple life with few frills and unnecessary possessions. Though I am sure scholarships and payment plans are available to needy and deserving families who wish to enroll their kids in this school, the reality is that even then, few families could live a spartan, minimalistic life without the trappings of some degree of luxury and be able to afford the cost. As a brief aside, those who attend Quaker schools or send their children there are not required to be Quakers themselves (for example, President Obama, Michelle, and their two daughters are not), but I know that many that send their kids to Friends school are.

A two-income family making a total of $100,000 a year between two breadwinners would find approximately 15% of their yearly paycheck consumed in tuition cost alone. There are other expenses to factor in as well like trips, special functions, organic/socially conscious food products, textbooks, and unforeseen costs which always pop up in an educational setting. Put together, I can't say there's much in the way of equality here, either. What I observed Sunday was a bunch of middle to upper middle class white kids whose parents clearly had substantial means. They were well-behaved, highly educated, and extremely homogenous. I couldn't help contemplating the immense expense in proportion to my own educational career. For me, FOUR years of undergraduate at a state university cost $17,000 in tuition alone. At this school, that sum would merely cover all of ninth grade and a small fraction of tenth grade.

I don't want to seem like an disloyal Friend. No doubt these children get special privileges and specialized lessons as part of their enrollment. They are taught a progressive curriculum that emphasizes social justice, liberal values, and Quaker virtues. Certainly I don't want to imply that the schools which bear our name and spread our teachings are somehow hypocritical. I just wonder if perhaps we haven't strayed a bit from our core principles in a desire to create the most perfect educational experience ever developed. I wonder sometimes if these kids even realize just how good they have it. Rather ironically, social justice often comes with a steep price tag attached, meaning that those who wish to be as earth-friendly, socially conscious, and ecologically helpful as possible are far too often the only ones who can monetarily afford to be.
Posted by Comrade Kevin at 12:11 PM