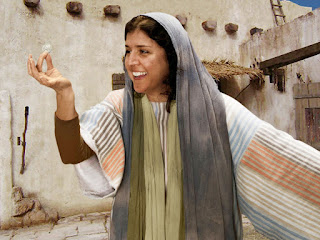 Anyone who knows me well recognizes that I don't like being caught flat-footed. After a trip, I frantically unpack and put everything back exactly where it was before I left. I recently read somewhere that my behavior is symptomatic of someone who wants to assert control over unfamiliar surroundings. No one panics more than me when I momentarily lose my cell phone, or my wallet, or my keys. Most of the time, such items are easily found, and yet in the process of locating them I'm convinced they are gone forever, never to return.

This is why I am often reminded of the biblical Parable of the Lost Coin.

Suppose a woman has ten silver coins and loses one. Doesn't she light a lamp, sweep the house and search carefully until she finds it? And when she has found it, she calls together her friends and neighbors, saying, "Rejoice with me, for I have found the coin that I had lost.”


Jesus speaks here beyond the literal, specially about the concept of redemption. And by this he means the radical notion that it is never too late to turn away from sin. There is no hierarchy in Heaven over who arrived first or last. This speaks contrary to the way we are conditioned to think and the games we play in the course of our lifetime. We learn to flaunt our credentials, our history of good works, and the sacrifices it took to reach them. We rationalize what we do by saying that such things are simply the way of the world, that they are necessary evils, and they cannot be evaded.

In life, we expect to be treated differently if we've reached some high achievement, made lots of money, or accumulated some combination of the two. In political parties, workplaces, and especially in churches, seniority means that those who have been in good stead longer have more say and more control. These people who occupy the favored seats have the right to guide and lead in the way they choose. To many, Jesus' ministry is an egalitarian one, where the first person to speak is held in the same high esteem as the one who has spoken ten thousand times before.

Backing up one verse from where we started out, the meaning of the parable is made clear.

I tell you that in the same way there will be more rejoicing in heaven over one sinner who repents than over ninety-nine righteous persons who do not need to repent.


The upcoming Presidential election showcases two of the least religious candidates in American history. Hillary Clinton rarely mentions her suburban Illinois Methodist upbringing, a past that at least instilled the candidate with a strong sense of social justice. On the other side, Donald Trump could almost be considered areligious, a fact that until this moment was a sure violation of Republican orthodoxy. Assuming the point is raised during the campaign, Trump can avoid even discussing religion, specifically Christianity on the stump unless placed on the defensive.

This would be unheard of not that long ago. GOP candidates have consistently and conspicuously put public displays of faith before voters for a very long time. Courting Evangelical conservative voters, according to the conventional wisdom, panders to the base. It is a move of either cynicism or desperation that many such voters have seemingly placed victory above rhetoric this go round. Clinton is not especially strong on the issue and is unlikely to force the issue. Neither candidate is likely to have a Pastor Wright problem this cycle.

Every election is a barometer of how we have changed as a nation. Only the once-in-a-decade census shows the macro trends that began small, yet grew steadily over time. 2016 might well the first sign that we as a country have moved towards a new Post-Christian reality. Here on the East Coast, organized religion has been dying for a long time. The Midwest and the South continue to uphold long-standing religious traditions and have the highest rate of church attendance, but disenfranchised and thoroughly disgusted voices can be heard from those places as well. In time, I expect that more and more Americans will fall away from church or some sort of religious observance.

Members of Generation X and the Millennials that followed them have consistently shown little to no interest in religion. Within these two subgroups, what remains are a mere sliver of what once existed, a minority group of leaders and activists. These are the sort of people who take their convictions and leadings very seriously, often wishing that others adopted this same kind of passion.

Extremely motivated believers are not enough. Church was designed for mass participation, specifically set up as a place where any and all are truly welcome. It makes me very sad to see these traditions slowly withering away. From now on, I inhabit a space dominated by baby boomers. They may be the last generation, in all seriousness, who wish to carry the mantle.

So how does one find these lost souls, these coins in search of a finder? Many Evangelicals have recognized and observed the distressingly slow decline for years. Many now seek to perpetuate and plant their chosen faith in developing parts of the world. The continent of Africa is a particularly favored target. Asia and South America are next. To some observers, this is merely another form of colonialism, presented with a slightly different backswing. These deeds and the cheerful enthusiasm in which they are undertaken makes even other religious people a mite uneasy.

The Roman Empire successfully spread Christianity across the civilized world, even as its borders eventually grew too large and unwieldy to defend. Today, some people of faith are completely in favor of outsourcing a precious commodity to the third world, their eye on conserving the old ways, keeping Christianity alive, thriving, and intact.

I personally am highly conflicted about the process, as I most certainly do not want my own faith, Quakerism, to die out. Neither do I wish to supplant the ideas of the conqueror upon the conquered, even though that very same process made me who I am today. Assuming I am speaking to those who live in the so-called First World, the same process made you who you are today, as well.

Speaking of American politics, let me put it another way. When I fear that our own treasured Democratic values themselves are truly under threat, not presented in a spirit of reactionary fear-mongering, then I will sound the alarm for a five-alarm fire. Until then, everything is not lost, but time is of the essence. We need to act and come together. Our causes are linked by necessity.

Members of liberal and progressive faith traditions are not nearly as ambitious as our Evangelical and ideologically conservative brothers and sisters. Many of the former are divided among themselves as to know how to best grow the faith in the parts of the world where we first came to be. But in truth, the extreme skepticism and even hostility towards organized religion has in large part caused this problem. Sixty years ago, a sitting U.S. President could state, without pandering to voters, that he was a Christian and a Democrat, and nothing more.

The last Democratic President to make the same distinction was Jimmy Carter, whose rise to prominence came about four decades ago. Since then, the liberal electorate and the powers that be have skillfully talked out of both sides of its mouth on the subject of religion, much to its detriment. It has equivocated by way of a mealy-mouthed, on-one-hand-but-on-another-hand ambivalence that is always careful to offend no one, but offers no real path forward.

And it's this attitude, among others, which must change if Christianity in its current form is to even survive the next few decades. Faith is undone and perverted by people, not by the concepts and precepts themselves. The Left is reaping what it has sown by disassociating itself from Christianity, and sometimes even a higher power. The Right has dug its own grave by selectively picking the verses, moral lessons, and self-serving emphasis it most agrees with, implying that the entire faith itself has no greater context aside from the narrow interpretation of some. Both are wrong. Neither is correct.

If all else fails, I suggest buying a one-way ticket to some simpler place, some far away hamlet. A person might be heard and understood there, not talked over on the cable television news program of one's choice. The next six months are going to be bitter and nasty, and the vitriol ginned up by both sides will likely persist well past November. If ever the world needed religion, let it be today. The message remains, but we must stop resisting, thinking that we are somehow in control of our own destiny. Election years are always proof to me that despite on-message delivery and focus groups, one can never prepare for the unexpected.
Posted by Comrade Kevin at 2:53 PM