When A Man Takes Paternity Leave 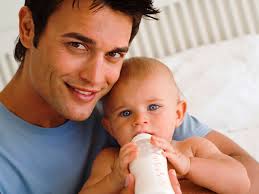 I should begin by saying that I rent space on the opposite end of the pharmacy counter. With multiple ailments and disabilities, I have no choice but to take my medications in a compliant fashion. But I say this only as a means of introduction to a much more interesting topic.

When a man takes paternity leave, outside of professional sports and testosterone circles, we Americans applaud. We're becoming civilized like the rest of the world, we say. But the rest of American society must change, too. Our attitudes and expectations must be reformed. The system would buckle under the pressure if all men participated. Below is what I mean.

The way it has always been is not designed for men to take off the way women have since time immemorial. I've suffered because my hard working and entirely competent pharmacist has taken paternity leave. For over a month, everyone has been short-changed. The men, mostly, who have filled in for him are temp workers, many of whom take little pride in their work and are dubiously competent. They wait for their next assignment elsewhere, wishing that they could be assigned somewhere permanent.

Let's not forget that a pharmacist with his or her own store makes a very generous salary, sometimes over $100,000. The temps are not so fortunate. They are paid per diem for their wages. I am not totally dismissive of their plight. A more smartly managed workplace would have designated temp workers who would know where their next assignment was coming from well ahead of schedule.

Every day I go to the pharmacy, I see a different face wearing a white coat. I can't imagine what it must be like to pick up on someone else's system and weave it in with one's own in a single day or maybe a string of days. There's something nomadic about this way of life and when there are gaps, highly inefficient, not streamlined ways have to suffice in the minds of those who plan such things.

It doesn't have to be this way. It begins by smarter action and not resting on the haunches of the past. If paternity leave remains a rarity, we collectively lose out. I admire my pharmacist for taking an option available to him, giving him a chance to bond with his newborn child and to assist his wife. We are still beholden to the notion that raising young children is women's work and that a father's place towards parenting is distant and somewhat detached.

Old habits are what we are fighting. I think the change, if we agree to make it, will come slowly and incrementally. The roles of masculinity and societal patterns are being challenged by the mere notion of paternity leave. This is what makes some men bemoan that "real" men are no longer to be found in sufficient quantities or to feel that maleness is under attack from emasculating forces. But what we are really becoming is more compassionate, even if the latest news report would have you believe otherwise.
Posted by Comrade Kevin at 11:05 AM