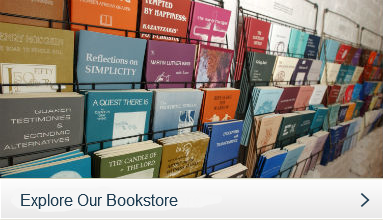 The Quaker pamphlet is completed, five revisions later, and now in the erstwhile hands of the copy editor. I learned a bit more about the full process of publication yesterday. From start to finish, it will take six months. This is pretty standard across the board, regardless of genre. I'm curious to know the sort of changes that will be desired of me and the nature of the feedback they'll provide. It's impossible to say yet.

If approved, the initial print run will be 700 copies. If a Meeting or group finds something worthwhile in it, they may order a few for themselves. I'll do the best I can to publicize its release and use every hard won connection for my own advantage. Confidentially, I'm not even sure I know 700 Quakers. Maybe a couple hundred at most. By means of comparison, I only have 155 Facebook friends at last count. Probably half of them are also Friends.

I have dreams of triumphantly celebrating the release at Meeting following Worship. One can be sure that I will be elated if I reach the final stage. Before I let my fantasies run away from me, I need to take a reality check. No matter how much faith I have in my own abilities, this effort is by no means a done deal. I've laid the groundwork, yes, but my own opinions matter considerably less now than they did at the time of composition.

My writing, based in activism as it is, comes across much rawer than the norm, though the norm has recently changed. The primary editor of Friends Journal, possibly the most influential Friends publication, is a professed Christian, as I am. He has given greater visibility to writings that reflect his personal religious views, which is his right as editor. I will be forever thankful for his tutelage because he reached out to me when I was just starting out as a writer. Achieving the editor job is a coveted position, and even among pacifists and the generally peaceful, rivalry and competition are prominent.

I'm riding a new wave of religiosity and I hopped aboard at the right time. At this very moment, there are somewhere between ten to twenty young adult East Coast agitators who write with proficiency. It's a good club of which to be a part, and sometimes I feel like we're making lasting change, though I do also wonder if our ambition exceeds our influence. Among the one-hundred or so regular attenders of my Meeting, I know I've made a difference, but beyond that, it is difficult to tell.

In the whole of North America, there are slightly more than 300,000 Quakers. If one factors in regular attenders who have not formally joined, there several thousand more to add to the rolls. My writings and creative efforts are probably only appreciated by one-third of that amount, since there are multiple branches of Quakerism, similar to those in Judaism. I would like to reach all Friends, but our theological and sometimes political views differ considerably. I know some Evangelical Friends would reject me because I don't believe that Jesus is the only way to salvation.

I've often wondered how many card-carrying feminists there are out there. I would speculate that there are probably more of them than Friends. I draw a line of distinction between celebrities who proclaim a feminist identity and those familiar with the discourse and the terminology. Like Quakerism, feminism has lost many members over time. Second-wavers enjoyed massive popularity, as women's liberation struck a chord with the women of that generation. Should Hillary Clinton run for President in 2016, they will be her foremost supporters.

It was my fate, and indeed our fate, to be born into a time of great transition. Every activist or agitator seems to be setting sail into a strong headwind. My working class grandfather spent most of his life within the same twenty miles of the place of his birth. Now, I have traveled extensively and communicated with others in an online forum that would have been impossible earlier in my own lifetime. At times, I wonder if the human brain was meant for this much stimuli and this much adventure, and whether we can truly keep up with it.

When I start counting fellow beings as an intellectual exercise, I recognize the challenges inherent in making my point. Among 3,000 people, I am something of a rock star, but I never let that go to my head. There are bigger tasks that need solving. If I were a purist, I'd be content to cling to my own cheering section where we might all think and act the same. And by the time I die, whenever that may be, I wonder what those who attend my Memorial Service will say about me. As I see now from time to time, I don't want to outlive my friends, to be only a name to generations younger than me.
Posted by Comrade Kevin at 9:13 AM