What Makes a Gay Icon 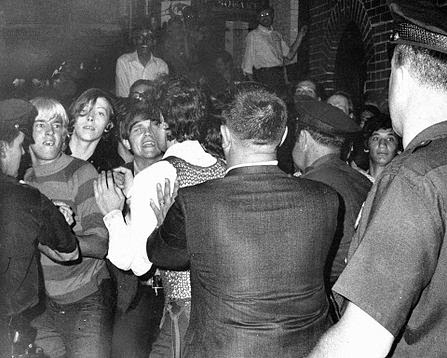 The original gay icon, at least the one recorded for posterity, was Judy Garland. Girlish and sweet, but vulnerable, she captured the affections of many gay men. Accordingly, the Stonewall Riots broke out shortly after Garland's death. Though more recent historical research questions how much of a factor her untimely demise really was, it has nevertheless become part of the mythology. Garland's life was tragic, and the lives of many queer men were similarly star-crossed.

In my generation, the eccentric redheaded pianist and alternative rocker Tori Amos was the preferred gay icon. But she was a very different strain, a strong woman with equally strong opinions. Where Garland succumbed to her own tragic back-story, Amos put behind her a brutal rape that occurred early in her career. In part, I have always seen this distinction as an accurate marker by which one can investigate progress. Once suppressed and harassed into submission, LGBTs today experience a fraction of the shame and guilt.

With this new found freedom, it is now time for a change in mindset. Reforms are always needed. As it stands, gay men sometimes idealize their effeminacy. Some project their attraction to all things feminine upon women, making the assumption that the women in their midst must surely conform to this same standard. A female friend of mine expresses consternation at times with one of her own friends, a gay man. He loves all things silky and embroidered, and those patterns only remind her of a femininity that was never a good fit.

I've always seen drag as an overcompensation, though I think it can be a very effective outlet. Though I've never had any desire to put on makeup and play pretend, I can appreciate the talents of others. When I first came out, I found that I didn't fit neatly into the roles others automatically assigned to me. I was too straight to be gay and too gay to be straight. This is how I personally understand what it is like to have one's perspective negated and ignored, even though most of the time being overlooked is entirely unintentional.

Defining what a gay icon is can be difficult. I'm not sure I understand it myself. It seems to be a moving target, keeping pace with the progress of our society. Women are encouraged to be themselves, rather than emulating breathy, girlish voices and learned helplessness. I've always been attracted to the off-kilter beauties who never fit well into anyone's boxes. I'm a strong-willed individual who finds equally strong-willed people appealing.

I'm also speaking of male privilege. Oversights similar to what I have mentioned are not always intentional. Even queer men have been socialized as male. Any group specifically designated for LGBTs is routinely dominated by gay men. While on a cruise ship two years ago, the group Friends of Dorothy was advertised in each day's events. Friends of Dorothy is slang for a gay man, alluding to Judy Garland's performance as Dorothy in The Wizard of Oz. It's becoming an antiquated term, but once again no invitation is extended to lesbians.

The writer William Goldman may have defined best the link between gay men and Judy Garland.

Homosexuals tend to identify with suffering. They are a persecuted group and they understand suffering. And so does Garland. She's been through the fire and lived – all the drinking and divorcing, all the pills and all the men, all the poundage come and gone – brothers and sisters, she knows.


A new generation of LGBTs can more easily avoid living a life of tragedy as a persecuted group. I appreciate the hard work of those who came before me, but I admit I have little patience for angst and doom-laden persecution fantasies. I'm ready to step into the sunlight, in spite of past experiences. If it had been my decision to make, I would not have selected the attitudes of my parents and family. Otherwise, this is simply how I am and I make no apologies for it.

I can count many women in my life who have become my own icons, those I respect and love deeply. I am thankful that they are present. I recognize that my icons are not perfect, but I don't expect them to be. I hasten to use the term, because to me that connotes complete adoration and worship. Few people wish to be placed on a pedestal and held to an impossible standard. I only asked for equal footing with everyone, where I might never have to live somewhere over the rainbow, in the world of unfulfilled dreams.
Posted by Comrade Kevin at 9:05 AM

Beautiful post! And shows the many problems that queer men face with this. Although it is a shame that homosexual women were left out of that cruise. I'm sure there are plenty of gay women who are fans of Judy Garland as well.