A Marriage Story for All The Skeptics Out There 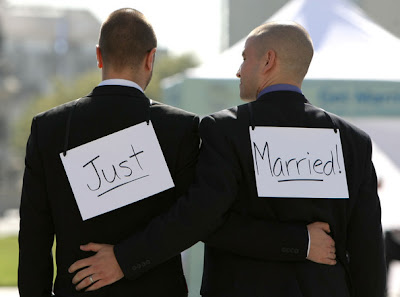 Recently I attended a Quaker wedding. Having now introduced the subject of this entire post, the temptation is to add a sufficient qualifier. None of the most common phrases used sounds especially elegant. Same-sex marriage or its compliment, same-gender marriage, sounds pedantic. Gay marriage sometimes implies that a union between two homosexual people is less authentic or valid than one between a heterosexual couple. In conclusion, what I will say is that there were two grooms. And over the past nine months I have gotten to know the both of them, which was why I was put to work that day as the world’s most nervous and highly anxious usher. Friends tend to be introverted and somewhat socially awkward, and this Friend is no exception.

What I found most intriguing was not the beautiful flourishes scattered here and there throughout the Meetinghouse grounds. Instead my attention was drawn to how multicultural the gathering truly was. It’s easy to be skeptical of such a claim wherever it is voiced. "Multicultural", as many of us understand it is shown to be some sort of desired ideal to inspire to, and once temporarily attained, self-conscientiously announced out of fear it will go unnoticed otherwise. The diversity present here was so natural and nonchalant that one felt that such a collection of different looking people sitting together in one room was no big deal at all. Much of this is due to the past residence of both men. The port city of Dubai in the United Arab Emirates is a true cultural melting pot in a way few cities really are and arguably even more so than our own country ever was. My Meeting is usually rather Caucasian in makeup, if you will, so it was astonishing to see the change.

Dark-skinned people with English accents rose to spoke. An openly gay Muslim Imam intoned meaningfully about the progression of tolerance towards LGBTs. Two children rose to give sweet, short, touching remarks about their love for both of their uncles. Friends and family comprised of several separate, distinct nationalities were also present. Superficial differences mattered not a whit in the final analysis. What was more important was what everyone had in common, each imparting their love and well wishes to the happy couple. If any word could suffice as a theme for the entire proceedings, love would be it. I wish those who cannot understand this concept when it does not narrowly apply to a man and a woman could have been present there. I pray that their narrow view might have been successfully challenged or at least they might have been provided a glimpse at the reality, not the hyperbole.

A sobering reminder of the greater challenges remaining for all of us arrived in the form of a close friend to both who spoke. In much of the Arabic world, homosexuality is still criminalized and harshly punished. Sexual relations outside of heterosexual marriage are to this very moment very much against the law. Punishments range from time spent in jail, fines, deportation, and even the death penalty. In a message that brought tears to the eyes of many, the man spoke about the daily paranoia present to all who are LGBT. “Each of us fears for the day,” he said, “where we will hear a knock upon our door.” And it is at this exact moment that I realized how fortunate we are to live in a country where this is not the case. We may express consternation and annoyance with our government and cultural limitations, for reasons that have much merit and validity, but neither should we overlook the progress we have made.

Some conspicuous absences were observable. One groom’s family was not present. He is not even out to them, and assuming they knew, their approval would never be granted. Though he has never vocalized his thoughts on the subject to me, I know it must have been upsetting. Had it been my own wedding and had none of my nuclear family showed up, I would have been quite offended. I’m sure there must have been a time where he decided that living as who he is was more important than conforming to the restrictions and prejudices of the place of his birth. Sadly, this decision is still one that is not uncommon to our own shores. This is why I have been quite deliberately vague about how I've reported every identifying detail of this entire ceremony. My intention is to protect his privacy. Repeated requests were made to those in attendance, in the form of strongly worded pleas, that pictures taken during the proceedings never be uploaded to Facebook.

Though the wedding left me feeling better about the state of the human race, I have only one mild annoyance to address. Many heterosexual people with their hearts in the right places sometimes react to and process same-sex marriage in means that are somewhat grating. Still secretly trying to invalidate the homophobia of past societal conditioning in their own lives, many overcompensate frequently out of guilt. Endearing stories about the betrothed are often consistently framed as if to say, “Look! Gay couples are just like straight couples! There’s nothing wrong with gay people after all! Gay people are normal!” But though I observe it and see it for what it is, neither do I overly stress my objections. The sentiment is genuine and full of best intentions, but the rendering may be a little awkward.

I’m torn between two different approaches about how to respond. The more militant, take-no-prisoners part of me wants to go off on this massive tirade about how gay marriage is in many ways nothing like heterosexual marriage and never will be. Normalizing or seeking to normalize something so intrinsically different by its very nature could be viewed as offensive. While it is correct to note that that sexual orientation shouldn’t matter in the grand scheme of things, it is also worth noting that LGBT people do have very different experiences from the majority of people. They have always been aware, often painfully so, of how different they are.

But it is at this point that I draw a line. I grew up fairly conservative, so I’m usually more than a little uncomfortable to read or hear about certain depictions and reinforcing anecdotes. Each of these is meant to, somewhat romantically, proclaim how transgressive and thus liberating queer identity once was back in the day. Purity has always been a highly subjective concept to me, and I feel the same way here. I’m certain the taboo, dangerous quality of non-heterosexual expression was a form of complete rebellion once upon a time, but I’ll take greater acceptance over a two-by-four across my skull any day. If same-sex or same-gender couples want to tie the knot by way of established traditions once only allowed to heterosexual couples, I support their decision. Had I not, I would never have showed up in the first place.

Returning to how I began, where I was speaking about the shortcomings of allies, another avenue altogether leads me to suggest that allies are to be appreciated, even when they don’t quite get it. Speaking from my own experiences, I am a man who regularly frequents activist groups peopled primarily by women. I’ve had to learn through trial and much error that being an effective ally is lots of work and introspection. If I were judged by my own opinions given not two years ago, I’m sure I’d feel exceptionally embarrassed at the quality of what I then considered insight and perspective. It is worth celebrating that we do finally live in a world where many of us can mention that we are going to a wedding with two grooms; the announcement doesn’t necessarily register instant shock, automatic contempt, or revulsion.

I think also it’s entirely possible to provide an authentic flavor not specifically heterosexual to an often staid tradition. The wedding I attended was in many ways very traditional in its adherence to Quaker customs. Yet, it was quite clearly the work and construction of two gay men in ways that were both subtle and not especially subtle at all. I was glad to see that there was no desire to overreach for the sake of conforming to stereotypes. But in the end, it was a wedding like many others I have attended in the course and progression of my life.

Same-sex marriages or unions don’t merely provide allies, friends, and family members the ability to reflect upon their own progress towards tolerance. I myself have gotten more comfortable in queer spaces, raised as I was against the backdrop of red state homophobia. Though I myself identity as queer, it took a long time to be okay enough with myself that I was okay enough in the company of with others like me. Once, visits to activities like Pride parades or venues like bars were often enough to give me an instant panic attack upon arrival. It was simply too much, too soon for me. And, since I partner mostly with women, it took a long time for me to figure out where I best fit on that broad, unsatisfying, and often flummoxing continuum. Sometimes it takes grand events like these to push past my fears. I may have to be flung into the deep end to reach resolution. I have uncovered with time that my most profound fear is that which exists inside me.

Posted by Comrade Kevin at 8:24 AM