How Far We Really Want to Go 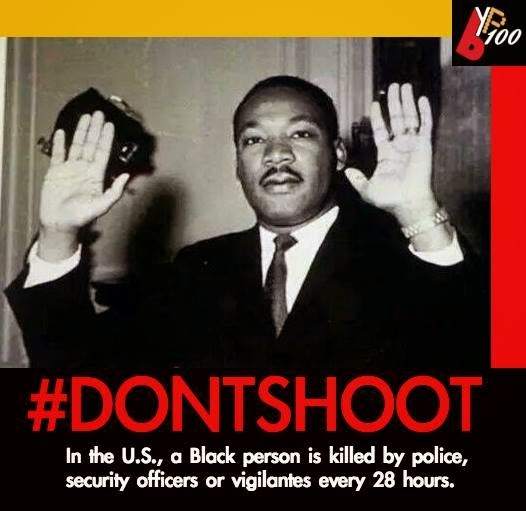 I won't pretend to say that I understand the African-American experience as regards law enforcement, or any of it, really. But what I will say, as a white man, is likely to offend some. I've never particularly been fond of officers of the peace. This is mostly because of the hyper-masculine, macho ways I've observed myself and the priorities many hold, as though through brute force and a lack of emotion one could somehow conclusively prove oneself a man. Their stock in trade is fear, and I think that fear is a highly overrated emotion. But like many (white) people, I am always quick to couch my criticisms in terms of being grateful that someone out there is willing to tussle with legitimate criminals.

White liberals like me have always have mixed feelings about the police, for reasons I have just mentioned and others. But we stay quiet and as long as we're not the target, we can live with the reality. Like many white Americans, I grew up in the bland suburbs of green lawns and chain stores that were almost exclusively Caucasian in racial makeup. The few black kids with whom I associated at school and around town were usually moved into the area quite deliberately because of their prowess at sports.

I am, in many ways, the very definition of white privilege. Though usually a good kid who rarely got in trouble, for a time I fell in with a sketchy group of other young men during high school. Most people would consider our crimes, possession and routine purchase of marijuana, as not particularly extreme. They were, however, illegal, and after the fact I learned that I'd had a secret ally the whole time, my father. My father was friends with the local police chief. Dad used his political connections to make sure I wasn't arrested, even supplying information to the cops that would eventually send my friends to jail.

I never saw law enforcement as benevolent keepers of the peace, but with time this sentiment grew stronger. This was partially because I'd learned to fear the police, recognizing that what I was doing was against the law. But neither did I worry about losing my life or being roughed up in the act of being apprehended. Law enforcement had a shadowy presence to it for me. I knew they were there and they knew I was there, of course. But they were never a truly malevolent threat, one that I knew of innately. They were almost an abstraction, never experienced regularly through my own experiences or the experiences of those in my neighborhood.

Black men, even to this day, can make me very afraid. Like many white people, I learned this particular phobia at a young age and would prefer to cast my fear aside, but it is very ingrained within me. When we combine this fear of the unknown with a cast of toughs who see themselves as a virtuous presence, cleaning up filth, problems arise. These problems are not new and fixing them will require a vast shift in perception, not just by police officers, but by society as a whole. I would argue that the most pressing problem is how we outsource our dirty work instead of getting to know our neighbors, ensuring that we protect everyone's kids like our very own.

I recognize that some of what I've said has been echoed by President Obama. But rhetoric alone, no matter how many people say it, words are insufficient to action. And though the paralysis in which we live has been pushed and shoved towards mild strides towards real progress, we still live on opposite sides of the city, separate and definitely unequal. I think any change has to begin with an honest analysis of why we place so much emphasis upon and grant incredible power to a group of people whose motives at the outset may well be intensely flawed.

I like to dream as much as the next person, but I'm also a pragmatist at heart. No amount of talking and good intentions is going to solve a problem this big or this complicated. I'd sooner we examine the nature of law enforcement and investigate the investigators. And in the process, we're going to need to challenge certain long-held beliefs, namely that black men are inherently violent and that they will remain this way forever. As our country grows bigger and more diverse, it will be tempting to reach for easy strategies like building fences around our country, but this impulse must not win the day.

When it comes to matters of social justice and reform, most people fall into one of three categories. Some people have such strong convictions that they are even willing to suffer for them. Sometimes this means spending time in jail or even giving their very lives for some grand cause they hold dear. We can see evidence of that across the surface of the world and at times in our own history. Other people would prefer a different path in which they personally prosper, unwilling to rock the boat, and certainly unwilling to make sacrifices. A third group seeks to find a middle ground between these two extremes and finds itself continually frustrated.

I cast my lot with the first group. The irony is that even those unwilling to fight still see a need to preserve the legacy and history of a rougher, grittier, more active time. The issue is that they define it in their own terms, forgetting the real story. In the minds of many, I see a pervasive need to preserve the Civil Rights Movement, even if we forget the stints in jail, the clubs, and the real pain experienced by many. This nation must decide whether it wants to play it safe, take risks, or find some unsatisfying middle path, which in many ways is what we're doing this very moment. But this is the human condition personified, though at least we know the choices that lay before us today.
Posted by Comrade Kevin at 11:02 AM